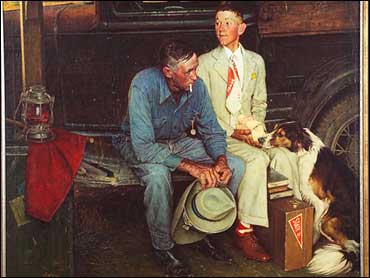 One of Norman Rockwell's most famous paintings was found hidden behind a fake wall in its owner's home, proving that the version the owner had long displayed was a forgery, family members and experts said.

They believe that the owner, illustrator Donald Trachte Sr., made the copy of "Breaking Home Ties" himself in the early 1970s, decades after he bought it from Rockwell and made it the centerpiece of his art collection.

"I think he just wanted to tuck these in the wall for his kids," the son said in Thursday's Berkshire Eagle.

Trachte died last year at 89 and apparently never told anyone the secret of his prized painting, which appeared on the cover of "The Saturday Evening Post" in 1954.

The canvas shows a father and son sitting on a truck's running board as the boy leaves for college. Scholars of the folksy painter consider it one of his best works, in the same stratum as "Rosie the Riveter," which sold for nearly $5 million in 2002.

Trachte bought the painting from Rockwell for $900 in 1960, when the two were neighbors in Arlington, Vermont.

Experts said Trachte probably made the copy in about 1973, when he and his wife were going through a bitter divorce. The settlement let him keep the Rockwell.

Experts and Trachte's family members had puzzled over inconsistencies between the Post cover and the canvas they assumed was an original. Among other things, the coloration and boy's face seemed different, but experts blamed poor preservation and sloppy restoration work.

Then, last month, conservationists determined the painting hadn't been restored.

Trachte's sons became more convinced that the work on their hands was a fake. A few days later, while scouring his father's studio, David Trachte, 54, noticed a gap in the wood paneling. He and his brother pulled it out, revealing the real Rockwell and other paintings his father had apparently copied.

"It's hard for me right now; I haven't uncovered enough to know when or why he did it," said Trachte Jr., 59.

The Norman Rockwell Museum in Stockbridge will display the original painting, along with Trachte's replica.