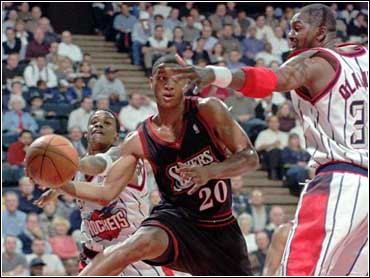 Shandon Anderson says he has always wanted to be a player like Clyde Drexler.

On the night Drexler was honored by his former team, Anderson had his best scoring game to help Houston to a 109-106 victory over the Philadelphia 76ers.

Anderson scored a career-high 32 points, including nine during a 15-0 run at the end of the third quarter and start of the fourth. Anderson said it was nice to have Drexler, whose number was retired in halftime ceremonies, watching from the front row.

"It was just a coincidence that I had this type of game on the night his number was retired," Anderson said. "But I always liked the way he played. I liked how he went coast to coast. In a lot of ways my game is a mirror image of his."

"He was a great 2-guard who got everyone involved and could post up, too. That's the kind of game I want to play."

Anderson matched up with Sixers guard Allen Iverson, and it was a mismatch on both ends. Iverson scored 40, but had trouble guarding the 6-foot-6 Anderson.

"I think we had a mismatch when I was matched up with Iverson and we were able to take advantage of it," said Anderson, who made a career-high 10 free throws. "I'm a post-up player and I think I played well. We took advantage of the situation, made free throws and drove to the hole and were able to get some easy points."

It was Houston's ninth victory in 12 games and coach Rudy Tomjanovich likes the way his team is going.

"Shandon was phenomenal," Tomjanovich said. "And (Kelvin) Cato was great with all those blocked shots (four). This was really a big win against a really good team."

"Iverson is really something special."

Philadelphia has lost five of seven.

"It was a great game," coach Larry Brown said. "Houston shot the ball well from the 3-point line in the first half. We made a great comeback."

Brown also said that Eric Snow "did as good a job on (Steve) Francis as anyone could." But Francis went to the locker room with 39 seconds to play with a strained left groin. He was scheduled to see doctors Friday and didn't fly to Minnesota with the team.

Francis still impressed Iverson. "He's a great player," Iverson said. "He has a lot to learn like I still do. He's a perfect fit for that team."

Iverson didn't want anyone comparing Francis to him. "Compare him to the great players that played before me, like Isiah Thomas," Iverson said.

Drexler, who won an NBA championship while with the Rockets, now is a college coach at Houston. His number was retired during a 36-minute halftime ceremony that included his college teammate, Rockets star Hakeem Olajuwon, along with Julius Erving, Jack Ramsey, Buck Williams and Kiki Vandeweghe.

Olajuwon had 14 points, the most he has scored since returning from hernia surgery Jan. 17, five rebounds and two blocked shots in 23 minutes to show Drexler he hasn't lost his touch.

Kenny Thomas added 11 points and 12 rebounds for the Rockets.

Houston led by as many as 12 points in the second quarter before settling for a 61-52 halftime lead.

The long halftime ceremony seemed to affect the Rockets, who missed nine of their first 11 shots in the third quarter and fell behind 67-65.

Houston led 80-79 before scoring the last four points of the third quarter and the first 11 of the fourth period.

Francis hit consecutive 3-pointers in the final 30 seconds of the first quarter to put Houston ahead 39-32. The 39 points were the most in a quarter for the Rockets this season.