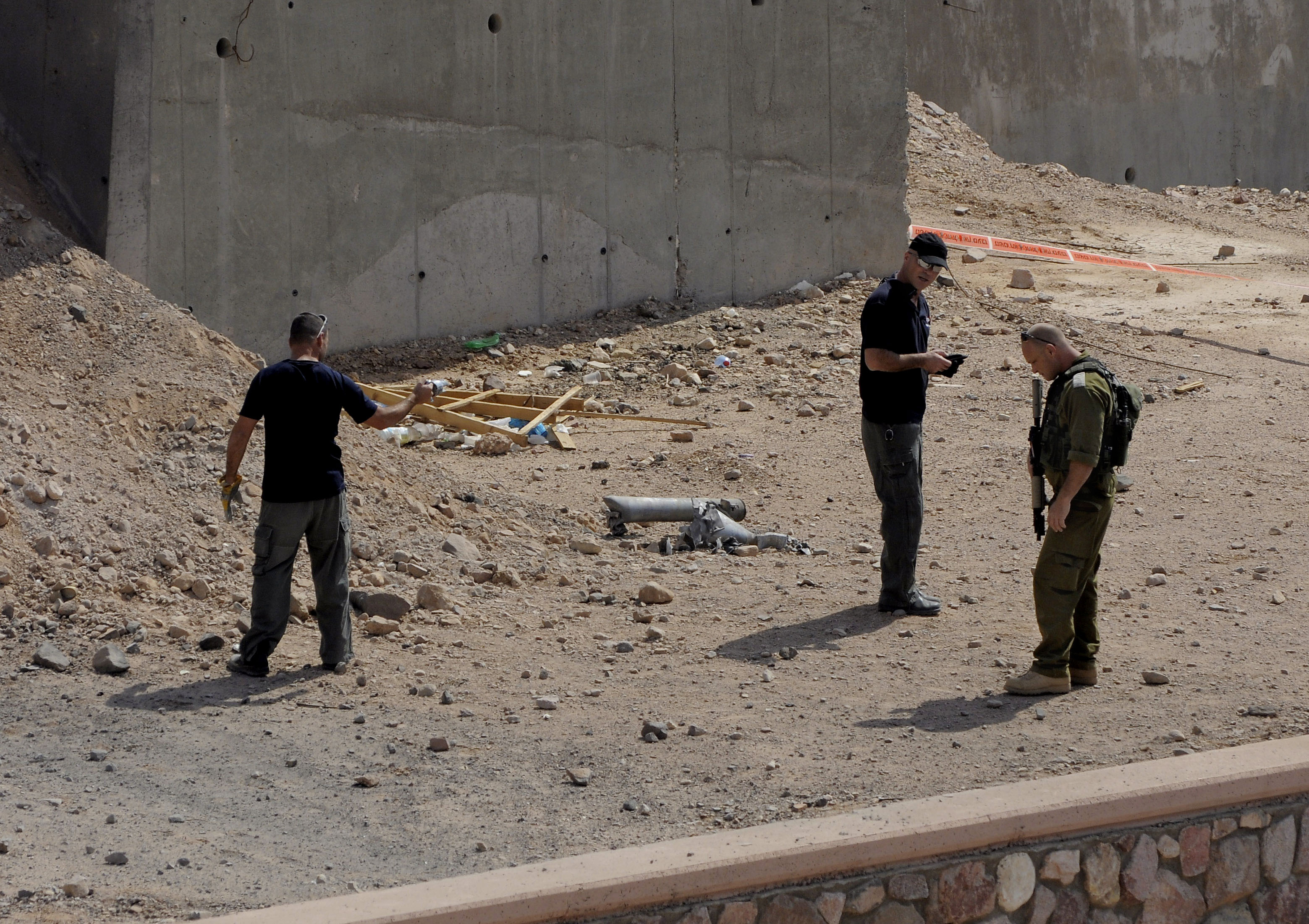 Nobody was hurt in the attack, police said, although one rocket exploded near the courtyard of a house. A shadowy hard-line Muslim group, likely based in the Gaza Strip, claimed responsibility for the attack.

Police spokesman Micky Rosenfeld said the remains of two Grad-style rockets were found, and bomb experts were looking for more.

Israeli Prime Minister Benjamin Netanyahu, who was traveling to London Wednesday for the funeral of Britain's late Prime Minister Margaret Thatcher, said he spoke with his defense minister and discussed how to respond.

Egypt was the first Arab country to sign a peace treaty with Israel but relations are cool. Sinai was until recently a popular destination for Israeli travelers.

In Cairo, a presidential spokesman said Egypt was investigating the attack.

"It is one of Egypt's basic principles not to endanger the safety and security of any country, either those sharing borders with it or others," said Omar Amer, spokesman for Egyptian President Mohammed Morsi. "Egypt is a state that calls for peace and preserves it."

Israeli officials have grown increasingly jittery about the situation in Egypt since the ouster of President Hosni Mubarak in 2011. Islamic militant groups, some believed to be affiliated with the al Qaeda terror network, have taken advantage of a power vacuum in the lawless Sinai and have carried out a string of rocket attacks and other operations along the border.

The deadliest was in August 2011, when militants from Sinai rushed into Israel, ambushing Israeli buses and cars with gunfire and a bomb, killing eight Israelis. During the melee, Israeli forces killed six Egyptian policemen. Israel later apologized for their deaths.

Israel believes militants from the Gaza Strip, which also borders Sinai, are also operating in the area. Israel's military chief, Lt. Gen. Benny Gantz, has said security in southern Israel from threats in Sinai is a high priority. The regime change in Egypt, now governed by the Muslim Brotherhood, has not damaged cooperation between the countries' security forces, he added.

"Coordination even improved in certain aspects," he said Tuesday. Senior Defense Ministry official Amos Gilad repeated that on Wednesday, after the rocket attack.

Israel has increased surveillance along the Egyptian border over the past two years, and is building a barrier along the 230-kilometer (150-mile) frontier to keep out militants and African migrants.

Reflecting the concerns, the military moved a battery of its new "Iron Dome" rocket defense system into Eilat earlier this month.

Although air-raid sirens went off during Wednesday's attack, the military said the system, which is meant to fire when rockets are headed toward populated areas, was not activated. It cited "operational circumstances" but did not elaborate.

Danny Lahav of Eilat's Chamber of Commerce told Israel's Channel 2 TV that he heard the sound of a "faint explosion" in the morning, followed by two louder explosions. Residents in the popular tourist destination remained calm, he said, adding that he hopes the attack won't dissuade visitors.

Israeli media said there were reports rockets had also hit the tourist city of Aqaba in neighboring Jordan, next to Eilat, but Jordanian Interior Minister Hussein Majali told The Associated Press that "no rockets" fell in Jordan.

A senior Egyptian military intelligence official in Sinai said the army was investigating the incident. He said investigators were looking into the possibility of strikes launched from southern Sinai, around the popular tourist area of Taba along the Red Sea and nearby mountainous areas.

The "Mujahadin Shura Council — Environs of Jerusalem" said in a statement on an extremist Islamic website that they would continue to attack Israel. Its logo and language suggested it was ideologically linked to jihadi groups that have a hard-line interpretation of Islamic law, and who believe they can pursue their goal of Muslim domination through violence.

Suggesting the group was based in the Hamas-ruled Gaza Strip, the statement called on the territory's militant Islamic rulers to release preachers from the ultraconservative Salafi movement. Hamas security officials routinely arrest Salafi activists in Gaza. Hamas sees them as a threat to their rule, while the Salafists see Hamas as too moderate.