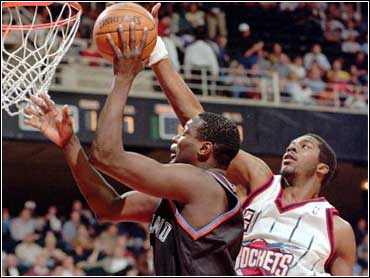 Kenny Thomas scored eight of his 14 points during a 23-9 run at the start of the fourth quarter, and the Rockets beat the Cleveland Cavaliers 91-83

We lost the lead in the third quarter, but the reserves came in and did a great job to save us," Houston coach Rudy Tomjanovich said.

In all, Houston's reserves outscored the Cleveland bench 39-8.

"It was just one of those nights," Thomas said. "Tonight I didn't hesitate. I took the shots."

"Turnovers were critical for us tonight," Cavaliers coach Randy Wittman said. "I thought we handled the ball too carelessly."

Guard Steve Francis returned to the lineup for Houston after missing two games with a right knee sprain but shot 2-for-13 and scored only four points.

"I felt great out there," he said. "It was a good first game back for me, but I couldn't make my shots because I couldn't get my legs under me."

Cleveland led 20-16 after the first quarter, but Houston opened the second period with a 14-3 run, getting six points from Anderson to take a 34-25 lead. The Cavaliers closed to 45-39 at the half after a pair of baskets by Miller.