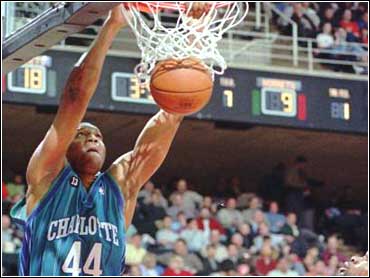 Cuttino Mobley and Steve Francis were just a couple of young players having fun.

Mobley scored 23 points, including seven in a row in a crucial fourth-quarter stretch, as the Houston Rockets beat the Charlotte Hornets 99-83 on Tuesday night.

The Hornets cut Houston's lead to 86-82 with 5:43 to play, but Mobley countered for the Rockets with his scoring spree. He had 11 of Houston's final 16 points.

"We're young, we like having fun and it's as simple as that," Mobley said. "Sometimes with us, the mental aspects of the game kind of go out the window but Steve and I are leaders. The more game experience we get the more we're going to lead."

Francis pointed out the Rockets were losing in the fourth quarter earlier in the season.

"That's a big change in the first half oft the year and now," Francis said. "A lot of it has to do with our coaching. They've been trying to do everything they can to help us out. I can't give them enough credit."

Eddie Jones led the Hornets with 20 points, and Derrick Coleman had 14 points and 11 rebounds.

After leading by 19 early in the second quarter, the Rockets took a 51-44 halftime lead and had to fight in the third quarter to keep a 75-69 lead going into the fourth quarter. Charlotte got within four at 69-65 with 2:39 left in the third period.

Mobley and Francis then came through in the fourth quarter.

"We ran some isolation plays foboth of them," Rockets coach Rudy Tomjanovich said. "We did a good job of moving the ball around. We just played basketball by moving the ball away from the double teams."

"The road has been tough for us," Hornets coach Paul Silas said. We've got to find a way to win. It's disappointing, but if we keep working the wins will come.

"We have problems with quick lineups. We look for our big guys to come in and bring it home for us and they didn't do it tonight."

The Rockets got off to their second straight fast start, hitting six of their first 10 shots while the Hornets opened 2-for-7. Matt Bullard hit three 3-pointers to lead the first quarter start.

The Rockets also got off to a fast start in Sunday's 89-83 victory over the Los Angeles Lakers.

Already leading 22-17, the Rockets went on a 14-0 run that extended over into the second quarter for a 36-17 lead. The Hornets went 5:42 without a basket during Houston's shooting display.

"We are all aware of what we have to do," Jones said. "Sometimes we do it and sometimes we don't. Tonight we had a lapse. We didn't make the shots and we didn't get to the line."

"We have to play harder and give more effort."