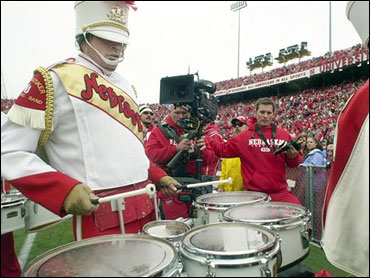 If Bobby Brown, Ozzy Osbourne and other celebrities whose daybooks are filled with court dates and rehab can get their own TV shows, why not Tommy Lee?

The notoriously rowdy drummer has racked up all the seemingly required credentials: A history of drug and alcohol abuse; run-ins with the law; and, perhaps his crowning achievement, drumming for Motley Crue, the 1980s metal band for which the word "decadence" only skims the surface.

So here comes NBC's predictably silly reality-show/comedy Tommy Lee Goes to College, in which Lee, taking cues from Adam Sandler and Rodney Dangerfield's doofus-going-back-to-school movies, tries his tattooed hand (and body) at the University of Nebraska-Lincoln. At least in the first two episodes, it's never really explained why Lee has this desire.

Judging from the first two episodes, it's to A) Graze for young college girls; B) Sign T-shirts, high-five fans and stuff his ego; C) Be a smart-aleck; and D) All of the above. Amazingly, the young college girls indeed flock to him.

"He hugged me!" one student proclaims. "You can room with me," another young lady says to him during Lee's first-episode search for a dorm buddy. Apparently, these women are forgetting that Lee was arrested for spousal abuse, and was accused of hitting his then-wife Pamela Anderson while she was holding one of their sons. Oh, but he's so handsome, admits the college chancellor's secretary.

The first of the six half-hour episodes finds Lee scrambling around dorm rooms, searching for a roommate. This stuff is actually pretty funny: One guy won't work because he doesn't have any Motley Crue CDs; another gets the thumbs-down because he snores. The winner: "Matthew," whose room is, courtesy of Lee's home-improvement entourage, turned into the ultimate rock-star pad, with a PlayStation 2, cappuccino machine and leopard-print bedding. What -- no strippers?

From that point on, the show dissolves into the obvious. There's Lee buying college books and flashing one on criminal law to the camera. Ha, ha. Here he is trying out for the school's marching band, struggling with musical discipline and pattern. He might not make the band. Big dramatic moment. Enter serious music! Oh, and of course, there's the "hot tutor," a blond bombshell who's NOT attracted to Lee. How can he get her to have sex with him? Cliffhanger!

This could all be in good fun, but it's too staged -- and admittedly so. The show's fine print, flashed for a millisecond at the end of each episode, says it all: "Tommy Lee attended classes but was not an enrolled student at UNL."

Really, he couldn't get in?

The disclaimer continues: "Some elements have been produced and/or edited for comedy."

You mean when the "hot tutor's" hair sexily blows in her face, that's not a draft in the school library or an air conditioner on the fritz?

The premise -- idiot rock star tries to better himself by going back to school -- has promise, and in better hands, it could be pulled off. But Tommy Lee Goes to College is too predictable, too unfunny, too I-could-see-that-joke-coming-from-a-mile-away. Besides, we've seen enough of Lee. Literally.