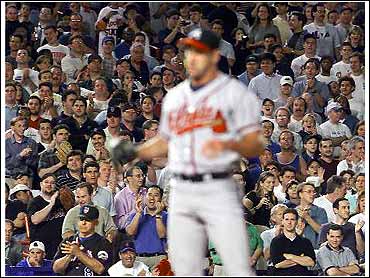 Facing the fans he once called "stupid," the Atlanta reliever was in total command Thursday night of both his mouth and his pitches.

Rocker came on in the eighth inning last night and got three straight outs in a 6-to-4 victory by the Braves, reports CBS News Correspondent Jim Axelrod.

Before the game, Rocker apologized in a televised news conference that was shown on the stadium's 26-foot-high scoreboard prior to the game to the 40,000 fans and 700 police officers - the usual number is 60 - in attendance.

"I am fully aware that the overwhelming majority of the people in this city are extremely charismatic and full of personality, although a bit spirited at times, but, you know, that doesn't make them bad people," Rocker offered.

A handful of scattered boos welcomed the apology and some fans still felt Rocker's comments to Mets fans and New York City were insincere.

"It's fake. He's just trying to get a little heat off of himself," one Mets fan said after hearing the taped Rocker apology. "It doesn't make up for what he said."

Thursday's pre-game apology was a reversal of his racist, homophobic and xenophobic comments in Sports Illustrated. He described strahangers on the No. 7 line as "some kid with purple hair ... some queer with AIDS ... some 20-year-old mom with four kids."

He also complained that New York has too many foreigners, wondering, "How the hell did they get in this country?"

Before coming north for the current series of games, he promised, "I won't be in a cab. I won't be on the bus. I'll be on that train."

But Rocker's plan to ride the No. 7 subway line from Manhattan to the Queens ballpark was quashed after a meeting with leaders of the players union. Instead he was driven to and from the stadium in a van with tinted windows.

During the game, Rocker sat in the Atlanta bullpen for the first seven innings, a protective covering over his head. Then manager Bobby Cox signaled for the left-hander to start the eighth.

A few objects, including a ball, were thrown at Rocker in left field as the crowd stood and booed.

"We expected the worst. We expected 50,000 people to barge the field when he came out of the bullpen door. They were very professional," Braves third baseman Chipper Jones said afterwards.

After striking out the first batter and retiring the next two on grounders - his work complete for the night - Rocker walked to the Braves' dugout with his head high and his mouth shut - a change of pace for the fastballer.

He was greeted by high-fives from his teammates, jeering Mets fans and five cops around the dugout.