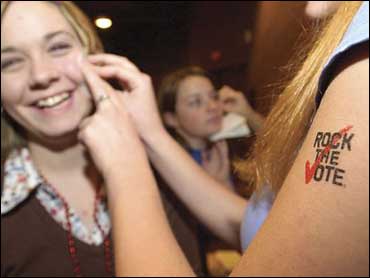 Rock the Vote turns 16 this year, but the birthday for the organization that has used Madonna, R.E.M. and other music stars to get millions of young people involved in politics is shaping up to be anything but sweet.

The nonprofit group founded in Los Angeles in 1990 is $500,000 in debt and down to just two employees, from 20 in 2002, according to tax documents and Hans Riemer, the organization's political director.

Rock the Vote has been courting donors and hopes to make an announcement in about a month about its future, Riemer said.

"It will be the new Rock the Vote. That's what we have in the works," he said.

The organization provided a recent letter to the Los Angeles Times that said Rock the Vote has a "modest debt" that is typical after a presidential election.

"While no organization wants to deficit finance, elections are important enough to require hard choices," the letter said in response to a recent article on its affairs. "So when we sensed the surge of youth participation in 2004, we used all the credit at our disposal. This is something organizations do routinely."

Rock the Vote registered 1.4 million voters for the 2004 election at college campuses, through its Web site and via ad campaigns featuring some of music's biggest stars.

"What has happened, as usually happens in off-election years, is that many of them have disbanded and they will have to try to regroup for the next election cycle," Owen said. "Rock the Vote seemed to be one that was a little less bad off than the others."

Ayeroff was co-chief of Virgin Records when he founded Rock the Vote — the first organization to effectively use the media to engage young voters. It has been followed by groups such as the New Voters Project, which targeted young voters in six states for the 2004 election, and music mogul Sean Combs' "Vote or Die" effort.

In a Web posting last Wednesday, Riemer said Rock the Vote was "taking advantage of the off-cycle to restructure."

Census numbers released in November showed a groundswell of young voters participated in the 2004 election. About 47 percent of eligible voters ages 18 to 24 cast ballots in 2004, up from 36 percent in 2000. No other age group increased its turnout by more than 5 percentage points.