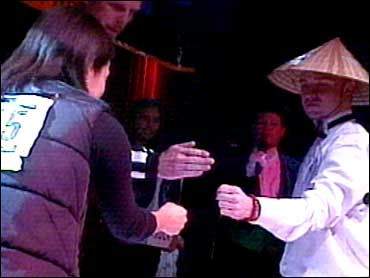 But asThe Early Show Correspondent Melinda Murphy reports, there is a lot more to this game at the Rock, Paper, Scissors International World Championships in Toronto.

Jason Simmons from Washington, D.C., or Master Roshombollah as he's called, says, "Like any professional athlete, I've been doing a progressive training schedule for the last six to eight weeks. Start off strong. But for the last week or so, I've been trying to take it easy because you don't want an injury going into a tournament of this magnitude."

The Master isn't kidding, or is he?

He says, "This is the point where you just have to let go of the fear, let go the desire, the anxiety and just trust that your training has gotten you to where you need to be."

That's the thing about the Rock Paper Scissors International World Championships. For some, it's just fun. For others, it's the chance to win an international title.

How One Kidney Donation Kept On Giving

The Master says, "The lesser strategy games do have their appeal, to be sure, but I go for something a little more complex. There's one of the sayings we have in RPS (Rock Paper Scissors), 'To the beginner the moves are few, but to the master, the moves are many.' I wouldn't be anywhere else in the world tonight."

More than 300 competitors apparently agree. One team even came all the way from the U.K.

Rob Roscoe of Team UK says, "We've flown three and a half thousand miles and potentially we'll throw four shakes and go back home again, but we've come to pick up silverware."

The silverware is a fancy trophy and 5,000 Canadian dollars. Not to mention bragging rights for beating out last year's winner who uses the Zen approach.

Defending champ Peter Lovering says, "Zen is I am the rock. I am the scissors. I am the paper. It's really about blocking out all your opponents."

That's pretty tough to do, considering all the fancy get-ups worn by contestants. The whole idea of dressing weird is to psych out your competition.

An Elvis dude with a huge blonde wig says, "You've got to think. You've got to look in the competitor's eyes and ask yourself, 'What is this person going to do?'"

Not only that, but you have to abide by the very specific and strict rules.

Seemed simple enough. But even so, Murphy didn't do so well. She was out after her first round.

Maybe it's because she didn't have a strategy. Master Roshombollah does.

He says, "There's a lot of strategy, a lot of gambits being played. For example: three rocks in a row, that's the avalanche; three papers, that's the bureaucrat; a rock followed by two papers, a fistful of dollars; and that's really only scratching the surface."

So it is not pure luck.

There may be something to what the Master says. After all, he kept beating out competitor after competitor.

One guy, who had his hand covered, almost had him.

Master Roshombollah says, "it was in a bandage the whole time and we assumed it was injured, but it wasn't. If you've watched his tapes, like I have, you know how deadly he is with that arm. I thought it was going to be a piece of cake and when he unwrapped it, I got kind of nervous. I broke my game face."

But in the end, the Master prevailed and made it to the final eight on stage.

But he noted he doesn't do so well against women.

To prepare he took off his jacket and tried a psych-out of his own: using his left arm.

But his trickery just didn't work. The Master was finally beaten.

"I tried a couple of distractive techniques," h esays, trying to analyze what went wrong. "Honestly, that may have been it. I was kind of going for the gamesmanship more than the actual play."

The night's final throw came down to a rock covering paper, making Rob Kreuger of Toronto a sports hero. Well, sort of.

As for Master Roshombollah, he is actually writing a book. It's called, "Wisdom In Three Parts. The Book Of Rock, The Book Of Paper, The Book Of Scissors." He claims it's going to be the penultimate guide to strategy for Rock, Paper, Scissors.