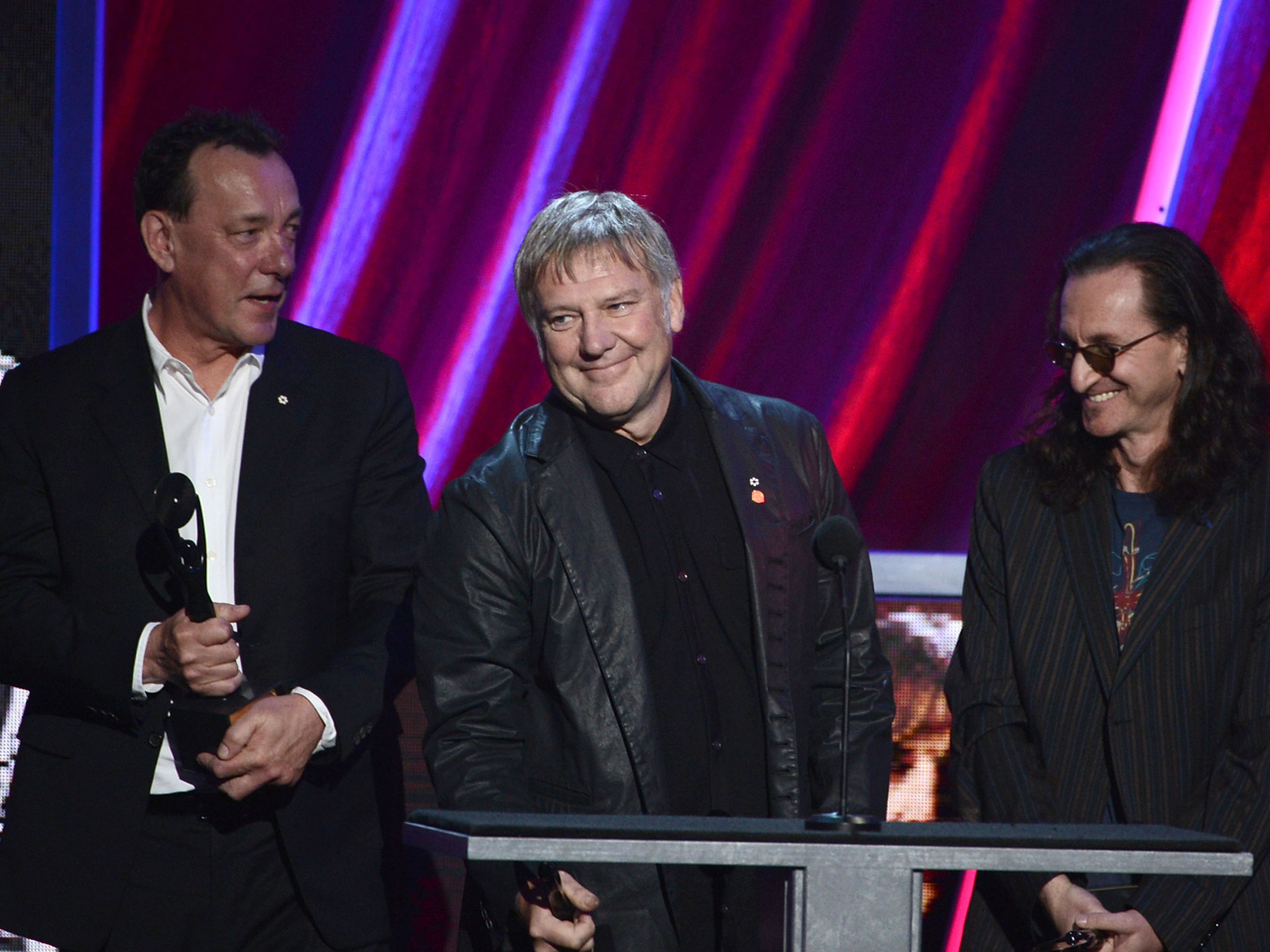 Rush fans can relax. The band is now officially in the Rock and Roll Hall of Fame.

The Canadian rockers were welcomed into the musical fraternity at Thursday's 28th annual induction ceremony by the Foo Fighters' Dave Grohl and Taylor Hawkins.

"We've been saying for a long time that this wasn't a big deal," drummer-lyricist Neil Peart told the Nokia Theatre crowd, most of whom came out to specifically support the band. "It turns out, it kind of is."

Rush gained entry following its first appearance on the ballot after repeatedly being left off the list since gaining eligibility in 1998, to the great consternation of the legion of Rush fans who cried bias against progressive rock. The long wait didn't seem to matter at Thursday's star-studded concert event, which ran over 5 hours. Peart, lead singer Alex Lifeson and guitarist Geddy Lee made up for lost time by launching into a rambunctious rendition of "Tom Sawyer" in front of more than 7,000 attendees.

During the induction Grohl said, "From day one, the band built its following the right way. No hype...they did it from the ground up without any help from the mainstream press...Their influence is undeniable and their devoted fan base is only rivaled by the Grateful Dead. Look at you people, all of you people, right here! And their legacy is that of a band that stayed true to themselves no matter how uncool they may have seemed to anyone."

Adler was inducted by Richard "Cheech" Marin and Tommy Chong before being serenaded by Carole King with "So Far Away." Jack Nicholson was among Adler's fans in the audience who lavished the producer-mogul a standing ovation.

With his guitar around his neck, John Mayer inducted the late King before joining Gary Clark Jr. for King-tinged jam session.

"Albert King is why guitar-face was invented," joked Mayer.

Newman -- joined by Jackson Browne, John Fogerty and Tom Petty -- kicked off the Los Angeles ceremony with a performance of his classic "I Love L.A." It was an appropriate song choice given the fact this year's event marks the first time since 1993 that the Cleveland, Ohio, institution has held its induction ceremony on the West Coast. Backstage, Newman was matter-of-fact about his inclusion.

"I didn't think it would happen until I died or something," he said.

Oprah Winfrey was on hand to welcome Jones into the Rock and Roll Hall of Fame, and Usher lauded the producer-mogul with a rendition of the Michael Jackson tune "Rock with You."

Jennifer Hudson paid tribute to Summer with a medley of her hits, much to the chagrin of Flava Flav. The Public Enemy rapper, clad in an all-white tux, was the only person in the crowd who remained on his feet throughout her performance. He later commanded the microphone for a long-winded acceptance speech when Public Enemy was recognized. His colleague, Chuck D, was more succinct in his remarks.

"Let us all not forget, we all come from the damn blues," he told detractors.The induction ceremony will be broadcast May 18 on HBO.