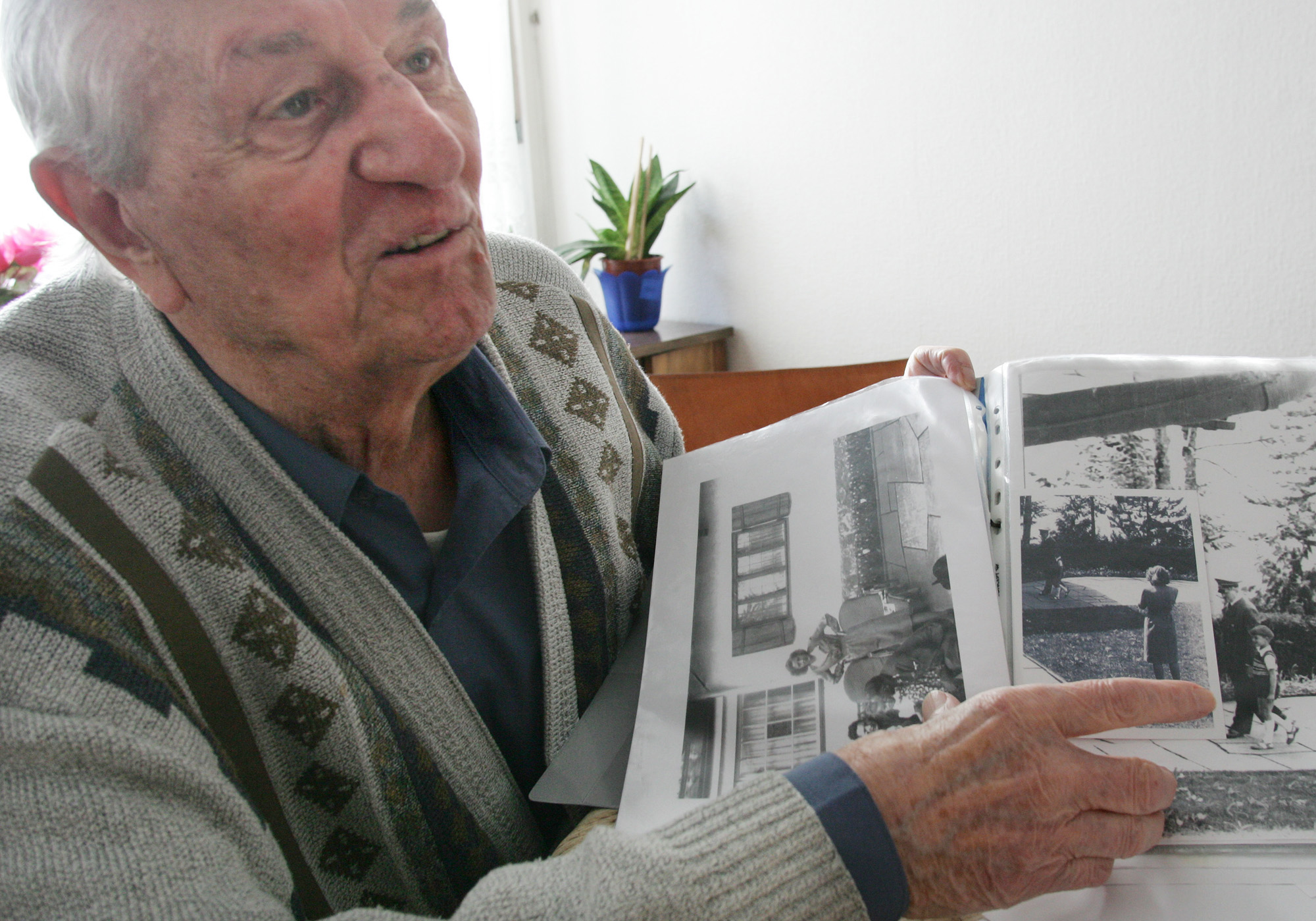 BERLIN He was Adolf Hitler's devoted bodyguard for most of World War II and the last remaining witness to the Nazi leader's final hours in his Berlin bunker. To the very end, SS Staff Sgt. Rochus Misch was proud of it all.

For years, he accompanied Hitler nearly everywhere he went, sticking by the man he affectionately called "boss" until the dictator and his wife, Eva Braun, killed themselves as defeat at the hands of the Allies drew nearer. The loyal SS officer remained in what he called the "coffin of concrete" for days after Hitler's death, finally escaping as Berlin crumbled around him and the Soviets swarmed the city.

Even in his later years, during a 2005 interview with The Associated Press in which he recounted Hitler's claustrophobic, chaotic final days, Misch still cut the image of an SS man, with a rigid posture, broad shoulders, neatly combed white hair -- and no apologies for his close relationship with the most reviled man of the 20th century.

The 96-year-old Misch died Thursday, one of the last of a generation that bears direct responsibility for German brutality during World War II.

In his interview with the AP, he stayed away from the central questions of guilt and responsibility, saying he knew nothing of the murder of 6 million Jews and that Hitler never brought up the Final Solution in his presence.

"That was never a topic," he said emphatically. "Never."

He appeared to have little empathy for those he did not directly know, and even for some he did.

Misch was moved nearly to tears when talking about Joseph and Magda Goebbels' decision to kill their six children in the Berlin bunker before committing suicide themselves. But he was also able to guffaw about a family friend, "a real lefty," being thrown into the Sachsenhausen concentration camp outside Berlin and noting upon his release that "the paper shirts (at the camp) were uncomfortable."

Born July 29, 1917, in the tiny Silesian town of Alt Schalkowitz, in what today is Poland, Misch was orphaned at an early age.

Against the backdrop of the bloody Russian revolution and the rise of Stalin, combined with the post-World War I popularity of the Communist Party in Germany, Misch said he decided at 20 to join the SS -- an organization he saw as a counterweight to the threat from the left.

He signed up for the Leibstandarte SS Adolf Hitler, a Berlin-based unit that originally was founded as the Fuehrer's personal bodyguard.

"It was anti-communist, against Stalin -- to protect Europe," Misch said, noting that thousands of other Western Europeans served in the Waffen SS. "I signed up in the war against Bolshevism, not for Adolf Hitler."

But when Hitler's armies invaded Poland on Sept. 1, 1939, Misch found himself in the vanguard when his SS division was attached to a regular army unit for the blitzkrieg attack. As German forces quickly closed in on Warsaw, Misch, who spoke some Polish, was sent with a party to negotiate the surrender of a fortress and was told by the troops inside that they needed time to think about the offer.

"As we were walking away they opened fire," Misch said at his home in Berlin. "A bullet came through here and right out, two centimeters from my heart."

After his evacuation to Germany and convalescence, he was appointed in May 1940 to serve as one of two SS men who would serve as Hitler's bodyguards and general assistants, doing everything from answering the telephones to greeting dignitaries -- and once running flowers to one of the Fuehrer's favorite musicians who had just gotten engaged.

Misch and SS comrade Johannes Hentschel accompanied Hitler almost everywhere he went, including his Alpine retreat in Berchtesgaden and his forward "Wolf's Lair" headquarters. He lived between Hitler's apartments in the New Reich Chancellery and the home in a working-class Berlin neighborhood that he kept until his death.

"He was a wonderful boss," Misch said. "I lived with him for five years. We were the closest people who worked with him ... we were always there. Hitler was never without us day and night."

In the last eight to 10 days of Hitler's life, Misch followed him to live underground, protected by the so-called Fuehrerbunker's heavily reinforced concrete ceilings and walls.

"Hentschel ran the lights, air and water and I did the telephones -- there was nobody else," he said. "When someone would come downstairs we couldn't even offer them a place to sit. It was far too small -- little cells of 10 or 12 square meters. It was no bunker to live in. It was an air-raid bunker."

After the Soviet assault began, Misch remembered generals and Nazi brass coming and going as they tried desperately to cobble together a defense of the capital with the ragtag remains of the German military.

He remembered that on April 22, two days before two Soviet armies completed their encirclement of the city, Hitler said, "That's it. The war is lost. Everybody can go."

"Everyone except those who still had jobs to do like us -- we had to stay," Misch said. "The lights, water, telephone ... those had to be kept going, but everybody else was allowed to go and almost all were gone immediately."

But that same day, Hitler clung to hope given by what turned out to be a false report that the Western Allies had called upon Germany to hold Berlin for two more weeks against the Soviets so that they could battle communism together.

"He still believed in a union between West and East," Misch said. "Hitler liked England -- except for (then-Prime Minister Winston) Churchill -- and didn't think that a people like the English would bind themselves with the communists to crush Germany."

On April 28, Misch saw the familiar figures of Propaganda Minister Joseph Goebbels and Hitler confidant Martin Bormann enter the bunker with a man he had never seen before.

"I asked who it was, and they said that's the civil magistrate who has come to perform Hitler's marriage," Misch said.

That night, Hitler and longtime mistress Eva Braun were married in a short ceremony in which they both pledged they were of pure Aryan descent before taking their vows and signing a registry book.

Two days later, Misch saw Goebbels and Bormann again, this time talking with Hitler and his adjutant, SS Maj. Otto Guensche, in the bunker's corridor outside the telephone operator's room.

"I saw him go into his room ... and someone, Guensche, said that he shouldn't be disturbed. And that meant 'Now it's happening,'" Misch said. "We all knew that it was happening. He said he wasn't going to leave Berlin, he would stay here."

"We heard no shot, we heard nothing, but one of those who was in the hallway, I don't remember if it was Guensche or Bormann, said 'Linge, Linge, I think it's done,'" Misch said, referring to Hitler's valet Heinz Linge.

"Then everything was really quiet, everything was still ... who opened the door I don't remember, Guensche or Linge. They opened the door, and I naturally looked, and then there was a short pause and the second door was opened... and I saw Hitler lying on the table like so," Misch said, putting his head down on his hands on his living-room table.

"And Eva lay like so on the sofa with knees up, her head to him. I don't remember now if Hitler sat on the sofa or on a chair next to it." Eva Braun had died of poisoning and Hitler had shot himself.

The silence and anticipation then gave way to chaos, when Misch ran up to the chancellery to tell his superior the news and then back downstairs, where Hitler's corpse had been put on the floor with a blanket over it.

"Then they bundled Hitler up and said 'What do we do now?'" Misch said. "As they took Hitler out ... they walked by me about three or four meters away, I saw his shoes sticking outside the sack."

After the bodies were carried outside, an SS guard ran down the stairs and tried to get Misch to join the spectacle outside as the two were covered in gasoline and set alight.

"He said 'The boss is being burned. Come on out,'" Misch recalled. But instead Misch hastily retreated deeper into the bunker to talk with comrade Hentschel.

"I said 'Do you think we're going to be killed?' and he said 'Why do you think that?'" Misch said. "I said 'I saw the Gestapo upstairs in the ... chancellery and it could be that they'll want to kill us as witnesses.'"

But Misch stuck to his post -- taking and directing telephone calls with Goebbels as his new boss until May 2, when he was given permission to flee.

"Everybody was upstairs in the ... chancellery, there were things to eat and drink there, downstairs in the bunker there was nothing. It was a coffin of concrete," he said. "Then Goebbels finally came down and said, 'You have a chance to live. You don't have to stay here and die.'"

Misch grabbed the rucksack he had packed and fled with a few others into the rubble of Berlin. Working his way through cellars and subways, Misch bumped into a large group of civilians seeking shelter in one tunnel.

"Two were playing music," he said, remembering how incongruous the scene seemed to him. "I came out of the death bunker of concrete, and here were two people playing music on guitar."

Misch later heard German voices above through an air ventilation shaft and climbed up to try his luck. But the voices came from about 300 soldiers who had been taken prisoner, and the Soviet guards grabbed him as well.

Following the German surrender May 7, Misch was taken to the Soviet Union, where he spent the next nine years in prisoner of war camps before being allowed to return to Berlin in 1954. He reunited with his wife Gerda, whom he had married in 1942 and who died in 1997, and opened up a shop.

In 2005, Sitting at his table next to a pile of mail from "fans" to whom he sent autographed photographs of himself in full SS uniform outside the Wolf's Lair, he leafed through his well-thumbed photo album remembering his days with the most infamous people in recent history.

He turned the page to photos of Braun in the idyllic setting of the Berghof, Hitler's Bavarian mountain residence, and lit up as he remembered a moment from those days.

"This small black dog comes running and gets under the fence, and Hitler said, 'My God, what is this? Racial mixing?'"