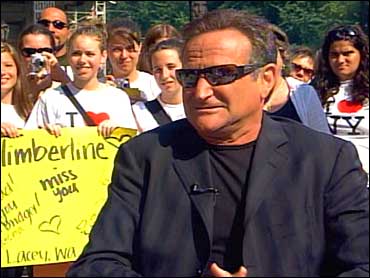 From the nanny in "Mrs. Doubtfire" to the zany alien in "Mork and Mindy," Robin Williams has played some truly whacked-out characters during his 30-year career. He says his latest, Rev. Frank in "License to Wed," is somewhere between the teacher in "Dead Poets Society" and the genie in "Aladdin."

"I have that idea of Chicago protestant, Episcopal — Catholic light: half the religion, half the guilt," he told Early Show co-anchor Hannah Storm when asked about how he saw his latest character. "He has the program working for — praying for the teamsters and also working for the children, has the full Chicago. You know, Chicago — city where the dead can vote."

Williams stars in "License to Wed" with Mandy Moore and John Krasinski of "The Office." Moore and Krasinski play a young engaged couple hoping to get married in the church of their dreams. Their reverend, played by Williams, is making them go through pre-marriage boot camp, which is mandatory in order to be married by him. He makes them do many absurd tasks such as role play and act as parents to ornery robotic twins.

Rev. Frank also teaches children about sin. In a scene from the movie, he talks to a classroom of kids about a woman who found out that her husband of three months is cheating on her with her best friend.

"What kind of since are we dealing with?" Rev. Frank asks the class in a "Family Feud"-type scene.

"Adultery. Not going out for milk when you have perfectly good jugs at home," he explains. "Show me adultery. A lot of people ask me what if I'm cheating with a woman who's really, really ugly, does that make it all right? No, it does not make it all right. It is still a sin. What other sins, anybody? Don't hesitate to draw on your parents' bad example."

Krasinski said he was intimidated by working with Williams, who has been entertaining the world for more than 30 years, but Williams said he had a surefire way to make the younger star feel comfortable.

Williams also told Storm that he has gone back to his comedic roots by performing in clubs. He said he recently performed in San Francisco with Dave Chapelle.

"It was really sweet in the days when Richard Pryor was on and it was lovely," he said. "It's a way to peel away the pretense, going on comedy clubs — keeps you ready to go."

Williams said he is also is kept on his toes by his family. He said his 15-year-old son reads French novelist Gustave Flaubert.

Williams also has his sight set on an iPhone. He called out to Apple CEO Steve Jobs during the interview, which took place right outside the Apple Store in midtown Manhattan.