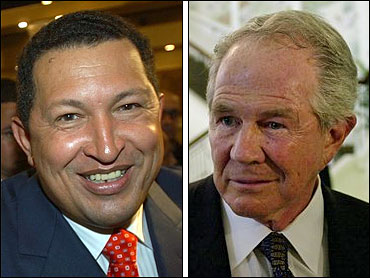 Religious broadcaster Pat Robertson apologized Wednesday for calling for the assassination of Venezuelan President Hugo Chavez, only hours after he denied saying Chavez should be killed.

"Is it right to call for assassination?" Robertson said. "No, and I apologize for that statement. I spoke in frustration that we should accommodate the man who thinks the U.S. is out to kill him."

Chavez, whose country is the world's fifth-largest oil exporter, has emerged as one of the most outspoken critics of President George W. Bush. He accuses the United States of conspiring to topple his government and possibly backing plots to assassinate him. U.S. officials have called the accusations ridiculous.

Earlier, Robertson said that his controversial remarks were "misinterpreted" and that he never called for the Venezuela's president to be killed.

"August is a slow news day but it seems like the whole world is talking about my comments about Venezuelan dictator Hugo Chavez," Robertson said at the beginning of his TV show, "The 700 Club."

"I didn't say assassination," Robertson continued. "I said our special forces should take him out. Take him out can be a number of things including kidnapping. There are a number of ways to take out a dictator from power besides killing him. I was misinterpreted."

On Monday's broadcast of the "700 Club," Robertson, the founder of the Christian Coalition and a former Republican presidential candidate, said, "If he thinks we're trying to assassinate him, I think we really ought to go ahead and do it. It's a whole lot cheaper than starting a war. … We have the ability to take him out and I think the time has come that we exercise that ability."

Televangelist Pat Robertson suggests the U.S. assassinate the leftist Venezuelan president.
Robertson said Chavez should be taken out to stop the world's fifth-largest oil exporter from becoming, "a launching pad for communist influence and Muslim extremism."

Chavez was winding up a visit to Cuba when he was asked about Robertson's statements at Havana's airport.

"I haven't read anything. We haven't heard anything about him," Chavez said. "I don't even know who that person is."

Cuban President Fidel Castro, who was standing next to Chavez stroking his beard, referred to Robertson's statements saying he thought "only God can punish crimes of such magnitude."

Relations between the Chavez government and the Bush administration have been strained for some time, reports CBS News State Department Reporter Charles Wolfson, but Robertson's call for assassination was something the State Department wanted no part of.

"This is not the policy of the United States government. We do not share his views," McCormack said.

But the Bush administration does share many of Robertson's views on other matters, such as stem cell research, and Robertson's largely conservative, evangelical audience overlaps with the core of Mr. Bush's political base.

About nine of 10 white evangelicals voted for Mr. Bush in the 2004 election — about as high as his support from any group of voters, according to exit polls. This group also supported Mr. Bush overwhelmingly in the 2000 election.

McCormack tiptoed around the question of whether the rest of the world might assume that Robertson speaks, if not directly for President Bush, at least for a sizable share of the Republican Party.

"I would think that people around the world would take the comments for what they are," McCormack said. "They're the expression of one citizen."

Robertson supported Mr. Bush's re-election last year and said he believed the president is blessed by God. Robertson also told viewers of his "700 Club" television program that God had told him Mr. Bush would win re-election in a "blowout."

Defense Secretary Donald H. Rumsfeld said the Pentagon isn't in the business of killing foreign leaders, but he also did not denounce Robertson or his remarks.

Democrats called the Bush administration's response tepid, and said it lends credence to the notion that the White House doesn't want to offend some of its most loyal supporters.

"It seems they are shuffling their feet when they should be running away from what Pat Robertson said," Democratic political consultant Steve McMahon said. "That this president, who projects himself as brave and bold, doesn't want to stand up to his own right wing is ironic."

Venezuelan Vice President Jose Vicente Rangel said the U.S. response to the incident would be a test of its anti-terrorist policy.

"It's a huge hypocrisy to maintain this discourse against terrorism and at the same time, in the heart of that country, there are entirely terrorist statements like those," he said.

The United States was believed in the past to have been involved in the 1963 assassination of South Vietnam President Ngo Dinh Diem and attempts to assassinate Castro.

Chavez has repeatedly accused the United States of backing a plan to assassinate him, which the U.S. has denied. Earlier this year he threatened to cut off oil exports to the United States if it supports any effort to overthrow him.

That is not an inconsequential threat when gas prices are brushing $3 a gallon. Venezuela exports 1.3 million barrels of oil a day to the United States — 8 percent of the total supply.