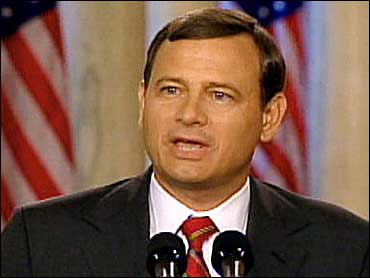 In a Nov. 21, 1985 memo released Monday by the National Archives, Roberts was responding to a move by Congress to permit "group silent prayer or reflection in public schools." He said he would not object if Justice Department officials announced that President Reagan had no formal role in passing an amendment to that effect, but said he would support such a move.

The Supreme Court's conclusion that "the Constitution prohibits such a moment of silent reflection — or even silent 'prayer' — seems indefensible," Roberts wrote in a memo to White House counsel Fred Fielding.

That material was part of nearly 50,000 pages of records related to Roberts when he served in the White House counsel's office. Before their release, the documents were reviewed by the National Archives staff to protect material deemed sensitive for national security, privacy and law enforcement reasons.

Earlier, in a June 4, 1985 memo, Roberts argued that White House officials could exploit the Supreme Court's decision prohibiting school prayer. While justices struck down an Alabama statute mandating a one-minute moment of silence, "careful analysis shows" it was on technical grounds, he said.

Roberts said that a majority of justices would allow a similar law if it were worded more carefully to avoid expressing a religious purpose behind the measure.

The Alabama law was struck down because of the "peculiarities of the particular legislative history, not because of any inherent constitutional flaw in moment of silence statutes," Roberts wrote in a memo to Fielding regarding the Supreme Court decision in Wallace vs. Jaffree.

Other documents covered subjects such as abortion, school prayer and war powers of the president.

The material was part of a written record involving Roberts' government service that have been identified in the Ronald Reagan Presidential Library.

Some 4,864 pages had been released previously.

Senate confirmation hearings for Roberts, selected by President Bush to succeed the retiring Justice Sandra Day O'Connor, are scheduled to commence on Capitol Hill on Sept. 6.