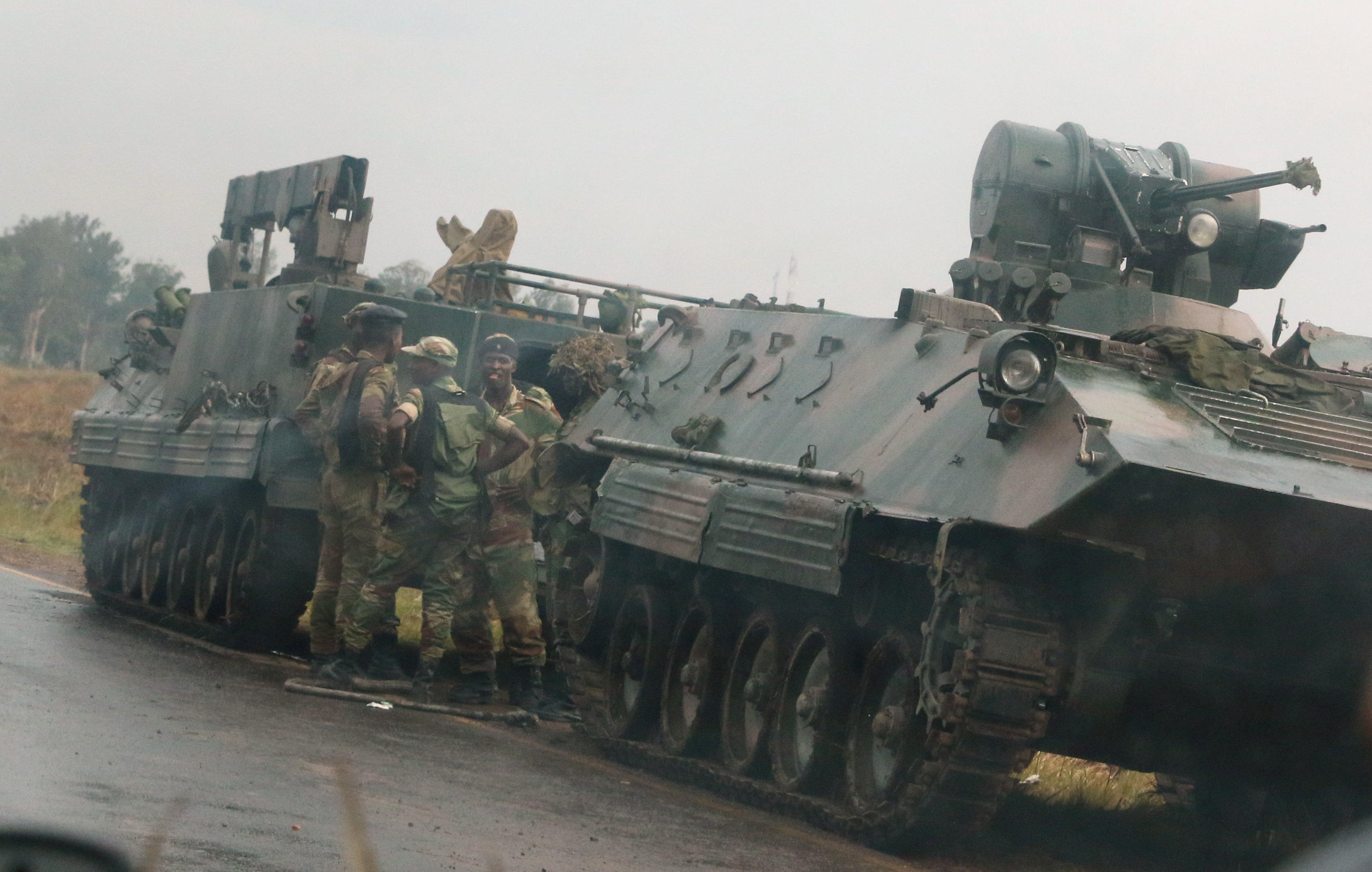 HARARE, Zimbabwe -- At least three explosions were heard in Zimbabwe's capital early Wednesday and military vehicles were seen in the streets after the army commander threatened to "step in" to calm political tensions over 93-year-old President Robert Mugabe's possible successor. The ruling party accused the commander of "treasonable conduct."

A Zimbabwe army spokesman told the Associated Press that Mugabe is "safe and sound." The army said it is targeting "criminals around him." On state television, the spokesman said "this is not a military takeover."

"We are only targeting criminals around who him who are committing crimes that are causing social and economic suffering in the country in order to bring them to justice," the army announced on state-run media.

The early Wednesday announcement comes after a night of unrest with military vehicles in the capital and several explosions heard.

The army statement says that "as soon as we have accomplished our mission, we expect that the situation will return to normalcy."

The U.S. State Department in Harare warned Americans to shelter in place and not leave their homes, CBS News' Margaret Brennan reports.

For the first time, this southern African nation is seeing an open rift between the military and Mugabe, the world's oldest head of state who has ruled since independence from white minority rule in 1980. The military has been a key pillar of his power.

The Associated Press saw armed soldiers assaulting passers-by in the early morning hours in Harare, as well as soldiers loading ammunition near a group of four military vehicles. The explosions could be heard near the University of Zimbabwe campus.

Those developments came several hours after The Associated Press on Tuesday saw three armored personnel carriers with several soldiers in a convoy heading toward an army barracks just outside the capital. For the first time, this southern African nation is seeing an open rift between the military and Mugabe, the world's oldest head of state who has ruled since independence from white minority rule in 1980. The military has been a key pillar of his power.

Mugabe last week fired Vice President Emmerson Mnangagwa and accused him of plotting to take power, including through witchcraft. Mnangagwa, who enjoyed the military's backing and once was seen as a potential president, fled the country and said he had been threatened. Over 100 senior officials allegedly supporting him have been listed for disciplinary measures by a faction associated with Mugabe's wife, Grace.

The first lady now appears positioned to replace Mnangagwa as one of the country's two vice presidents at a special conference of the ruling party in December, leading many in Zimbabwe to suspect that she could succeed her husband. Grace Mugabe is unpopular with some Zimbabweans because of lavish spending as many struggle, and four people accused of booing her at a recent rally were arrested.

On Monday, army commander Constantino Chiwenga issued an unprecedented statement saying purges against senior ruling ZANU-PF party officials, many of whom like Mnangagwa fought for liberation, should end "forthwith."

"We must remind those behind the current treacherous shenanigans that when it comes to matters of protecting our revolution, the military will not hesitate to step in," the army commander said. The state-run broadcaster did not report on his statement.

Showing a generational divide, the ruling party's youth league, aligned with the 52-year-old first lady, on Tuesday criticized the army commander's comments, saying youth were "ready to die for Mugabe."

On Tuesday night the ruling party issued a statement accusing the army commander of "treasonable conduct," saying his comments were "clearly calculated to disturb national peace and stability" and were "meant to incite insurrection." It was not clear whether the commander still had his post.

State broadcaster Zimbabwe Broadcasting Corporation read out part of the ruling party statement late in the nightly news, which was led by a report on regional tourism.

The army spokesman was not immediately available for comment.

"Yes, given the past two weeks' political events, it is tempting to speculate that there is a connection between the deployment of military personnel and the comments of the army chief of staff on an 'intervention' -- but there are very real dangers of violence breaking out as a result of rampant and unfounded speculation," African Defence Review analyst Conway Waddington wrote Tuesday evening, saying there appeared to be no other signs of an "organized coup" and that it could have been an act of intimidation instead.

ZANU-PF posted a statement on Twitter assuring the public "there is NO coup happening in Zimbabwe. Please continue with your lives and face up to your own problems."

Mugabe in the past has warned military commanders from interfering in succession politics. "Politics shall always lead the gun, and not the gun politics. Otherwise it will be a coup," he told supporters in July.

Frustration has been growing in once-prosperous Zimbabwe as the economy collapses under Mugabe. The country was shaken last year by the biggest anti-government protests in a decade, and a once-loyal war veterans association turned on the president, calling him "dictatorial" and blaming him for the economic crisis.

"Mnangagwa was held out by many as the best hope within ZANU-PF for piloting an economic recovery," analyst Piers Pigou with the International Crisis Group wrote Tuesday.

Now, "Mugabe will have to employ all his guile if he intends to ensure continued accommodation with the armed forces."