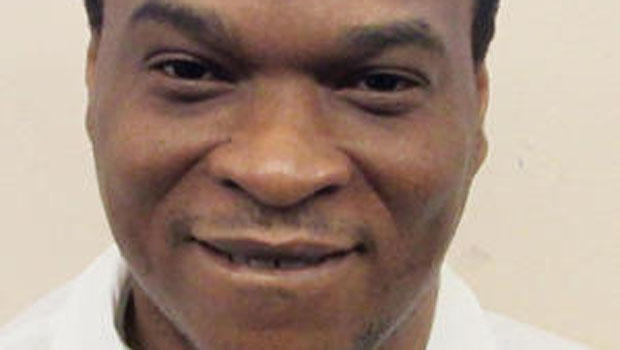 ATMORE, Ala. -- A man convicted of killing three people during the 1994 robbery of an Alabama fast-food restaurant was put to death Thursday by lethal injection.

Robert Melson, 46, was pronounced dead at 10:27 p.m. CDT Thursday at a southwest Alabama prison, authorities said. The execution was the state's second of the year.

State prosecutors said Melson and another man who used to work at the restaurant, robbed a Popeye's in Gadsden, 60 miles northeast of Birmingham, and Melson opened fire on four employees in the restaurant's freezer. Nathaniel Baker, Tamika Collins and Darrell Collier were killed. The surviving employee, Bryant Archer, crawled for help and was able to identify one of the robbers as the former worker which led police to Melson.

Collins' family members wore a badge with her photograph and the phrase "In Our Hearts Forever." Her family issued a statement saying that three young people lost their lives for "a few hundred dollars" and criticized court filings on behalf of Melson that challenged the state's execution procedure as inhumane. Collins' mother and two sisters witnessed the execution.

"He has been on death row for over 21 years being supported by the state of Alabama and feels he should not suffer a little pain during the execution. What does he think those three people suffered after he shot them, leaving them in a freezer?" the statement said.

Melson shook his head no when the prison warden asked if he had a final statement. A prison chaplain knelt with him. Melson's hands quivered at the start of the procedure and his breathing was labored, with his chest moving up and down quickly, before slowing until it was no longer perceptible.

Melson's attorneys had filed a flurry of last-minute appeals seeking to stay the execution. The filings centered on Alabama's use of the sedative midazolam which some states have turned to as other lethal injection drugs became difficult to obtain.

The U.S. Supreme Court temporarily delayed the execution to consider Melson's stay request, but ruled after 9 p.m. that the execution could go forward.

Midazolam is supposed to prevent inmates from feeling pain before other drugs are given to stop their lungs and heart, but several executions in which inmates lurched or coughed have raised questions about its use. An inmate in Alabama coughed and heaved for the first 13 minutes of an execution held in December.

Melson's attorney argued that midazolam does not anesthetize an inmate, but they might look still, because a second drug, a paralytic, prevents them from moving.

"Alabama's execution protocol is an illusion. It creates the illusion of a peaceful death when in truth, it is anything but," Melson's attorneys wrote in the filing to the Alabama Supreme Court.

The Alabama attorney general's office argued midazolam's use has been upheld by the U.S. Supreme Court and it has allowed multiple executions to proceed using the drug, including the execution of an Alabama inmate last month.

"Robert Melson's decades-long avoidance of justice is over. For twenty-three years, the families of the three young people whose lives he took, as well as a survivor, have waited for closure and healing. That process can finally begin tonight," Attorney General Steve Marshall said in a statement after the execution.