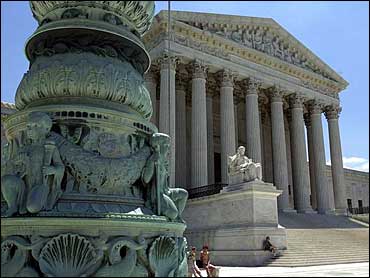 (CBS/AP) HUNSTVILLE, Texas - A convicted Texas killer who confessed to slaying five people at a car wash that fired him looked to the U.S. Supreme Court to spare him from his execution tonight.

Robert Wayne Harris, 40, was convicted of two of the five slayings in March 2000 at the Mi-T-Fine Car Wash in Irving. He was also charged with abducting and killing a woman months before the killing spree, after leading police to her remains.

Harris didn't deny the slayings, but his lawyer contended in appeals that he was mentally impaired, making him ineligible for the death penalty. Attorney Lydia Brandt also questioned the makeup of Harris' jury at his 2000 trial in Dallas, contending prosecutors improperly removed black prospective jurors from serving on the panel. Harris is black.

State attorneys opposed the appeals and said IQ tests disputed the mental impairment claims and that no racial component was involved in jury selection.

Harris served an eight-year sentence for burglary and other offenses when he  worked at the car wash for about 10 months before getting fired and arrested for exposing himself to a female customer. He then showed up during a business day before they opened doors, demanded the safe be opened and then shot the manager, the assistant manager and a cashier.

Two more employees were fatally shot while another was wounded. When another worker arrived, Harris explained he just stumbled upon the bloody scene. But the worker felt uneasy when Harris pulled a knife, and left the scene to call 911. Harris was arrested the next day.

Evidence showed Harris used money taken from the safe and bought new clothes, checked into a motel and asked a friend to buy him some gold jewelry.

"He knew from experience that they would not have deposited the weekend proceeds, and he was going to get the maximum amount of money that he possibly could obtain during this robbery," said lead trial prosecutor Greg Davis. "I remember just the vicious nature of the offense and the fact it was very well thought out and conceived by Robert Harris. Guilt is just crystal clear."

Prosecutors tried him specifically for the slayings of 36-year-old Agustin Villasenor, the assistant manager whose throat also was slit, and 46-year-old Rhoda Wheeler, the cashier. Harris was charged but not tried for killing Villasenor's brother, 32-year-old Benjamin, a seven-year employee; 48-year-old Dennis Lee, the car wash manager; and 15-year-old Roberto Jimenez Jr., an employee.

The day after Harris confessed to the car wash slayings, he led police to the remains of 37-year-old Sandra Scott who was missing for four months. He was charged but never tried for capital murder in her death.

Testimony at his trial showed he also planned to go to Florida and kill an ex-girlfriend.

Harris was 18 when he went to prison for burglary and other charges, as well violating probation, according to court records. He spent most of his time in administrative segregation, a confinement level for troublesome inmates. Testimony at his trial showed he set fire to his cell, assaulted and threatened to kill prison staff and inmates, dealt drugs and engaged in sexual misconduct.