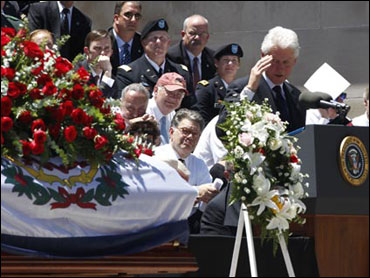 They are not the words you'd expect to hear at a memorial service.

Though his own career is a career is a testament to those assertions, Mr. Clinton was offering an explanation for the well-known stain on the life record of Sen. Robert Byrd: his long-ago association with the Ku Klux Klan.

"He was a country boy. He was trying to get elected. And maybe he did something he shouldn't have," said the former president.

But he said Byrd spent the rest of his life making up for his KKK affiliation. "And that's what a good person does," said the 42nd president in his tribute to Byrd on the steps of West Virginia's state capitol.

It was a dark chapter in Byrd's life that President Obama also could not ignore in his eulogy for the longest-serving member of Congress. He remembered speaking to Byrd about it.

"He said there are things I regretted in my youth," said Mr. Obama.

"I said none of us are absent some regrets, Senator. That's why we enjoy and seek the grace of God," he continued.

It was the first African-American president of the United States forgiving Byrd's one-time ties to a racist hate group.

"We know there were things he said and did that he came to regret," said Mr. Obama of Sen. Byrd.

Both current and former presidents felt it was an issue they could not overlook, even as they lavished praise and admiration on the rest of Byrd's life and record.

Mr. Obama called Byrd a Senate icon, a Democratic Party leader and an elder statesman. "And he was my friend," said the president, offering appreciation for the many courtesies shown him by Byrd when Mr. Obama was the new junior senator from Illinois in 2005.

"It's a life that immeasurably improved the lives of West Virginians," the president also said of Byrd, joking about how many buildings, roads, schools and other places in the Mountain State are named for Sen. Robert C. Byrd.

Byrd brought home the bacon for West Virginia, directing billions of federal dollars to his home state during his congressional career.

The most surprising tribute to Byrd came from Vicki Kennedy, widow of Byrd's close friend and colleague, the late Sen. Ted Kennedy.

"I'm not sure Robert Byrd would put it this way," she said, "but he was a rock star."

In his home state of West Virginia, he was more than that. Royalty, perhaps. King Bob.

And speaker after speaker at the Memorial Service pointed to the evidence that the feeling was mutual.

"He once said when I am dead and I am opened, they will find West Virginia on my heart," Senate Republican Leader Mitch McConnell said of Byrd.

It was that love affair between Byrd and his state that Bishop William Boyd Grove spoke of in his invocation.

He said the mountains of West Virginia weep and the rivers run salty with tears because of the death of Robert C. Byrd.

Byrd's home for eternity will be in Virginia, where he'll be buried on Tuesday next to his wife Erma. But neither death nor distance will cut his ties to West Virginia - or vice-versa.