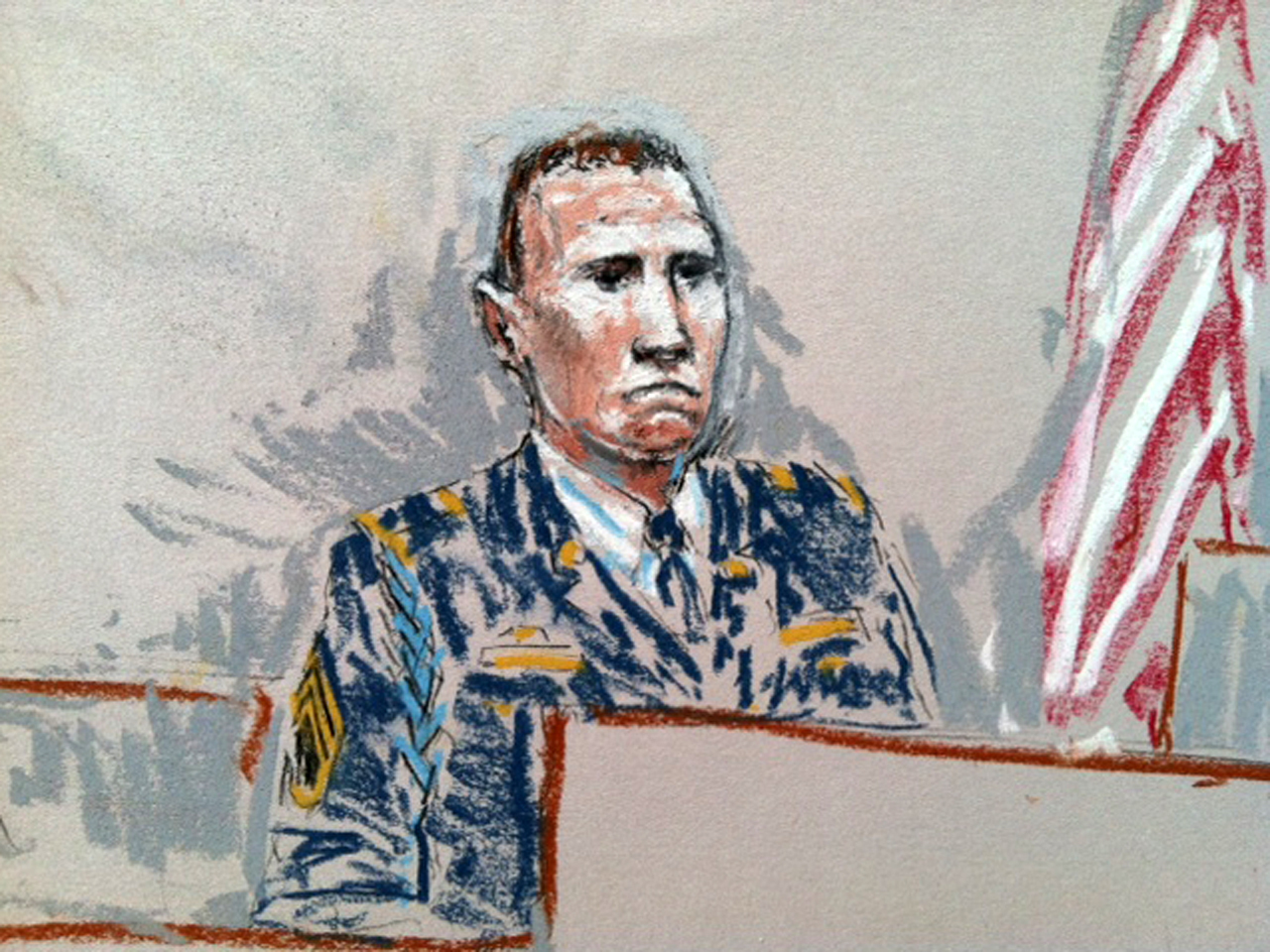 JOINT BASE LEWIS-MCCHORD, Wash. The U.S. soldier who massacred 16 Afghan civilians apologized Thursday for his "act of cowardice" as he made his case for why he should someday have a chance at freedom.

Staff Sgt. Robert Bales did not recount specifics of the horrors, but described the March 11, 2012, slaughter of villagers, mostly women and children, as an "act of cowardice, behind a mask of fear, bull**** and bravado."

"I'm truly, truly sorry to those people whose families got taken away," he said. "If I could bring their family members back, I would in a heartbeat."

Bales, 39, pleaded guilty in June in a deal to avoid the death penalty for the attacks. A military jury will determine if his life sentence should offer a chance of parole.

Bales said he was mad at himself for being angry all the time, drinking too much and hiding his problems.

Bales was nervous when he took the stand as the final witness in the hearing at which his lawyers have tried paint a sympathetic picture of the soldier to contrast his own admissions and the testimony of angry Afghan villagers about the horror he wrought.

Wearing the Super Bowl ring he won with the New England Patriots in 2002, Edwards said the slightly older Bales was an "unbelievable leader" who "took me under his wing" on their high school team. Bales was even magnanimous when Edwards took his position at starting linebacker, he said.

"He came up to me after that practice kind of sheepishly," said Edwards, who played nine years in the NFL. "He says, 'Hey Marc ... I want the team to be successful.'"

The jurors on Thursday also heard from an Army officer who served with Bales in Iraq. Maj. Brent Clemmer said it was unfathomable to learn that the competent, positive soldier he knew could have committed the atrocity.

"I walked myself into my office, poured myself a glass of scotch, and cried," he said.

A brother of the soldier testified at Bales' sentencing hearing, on Wednesday, portraying him as a patriotic American, high school class president and football team captain.

"There's no better father that I've seen," William Bales, 55, said of his younger brother. "If you brought the kids in here today, they'd run right to him."

The defense followed two days of testimony from nine Afghans, who spoke of their lives since the attacks.

Haji Mohammad Wazir lost 11 family members, including his mother, wife and six of his seven children. He told the six-member jury that the attacks destroyed what had been a happy life. He was in another village with his youngest son, now 5-year-old Habib Shah, during the attack.

"If someone loses one child, you can imagine how devastated their life would be," said Wazir, who received $550,000 in condolence payments from the U.S. government, out of $980,000 paid in all. "If anybody speaks to me about the incident ... I feel the same, like it's happening right now."

Bales' attorneys, who have said the soldier suffered from post-traumatic stress disorder, didn't cross-examine any of the Afghan witnesses.

Bales, a father of two from Lake Tapps, Wash., was serving his fourth combat deployment when he left the outpost at Camp Belambay in the pre-dawn darkness. He first attacked one village, returning to Belambay only when he realized he was low on ammunition, said prosecutor Lt. Col. Jay Morse.

Bales then left to attack another village.

The massacre prompted such angry protests that the U.S. temporarily halted combat operations, and it was three weeks before Army investigators could reach the crime scene.

If he is sentenced to life with the possibility of parole, Bales would be eligible in 20 years, but there's no guarantee he would receive it. He will receive life with parole unless at least five of the six jurors say otherwise.