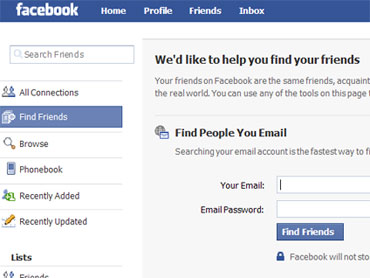 PORT ORCHARD, Wash. - Authorities say a 28-year-old man suspected of robbing a woman at a Washington ferry terminal "friended" her on Facebook the next day.

What did he say to her - will you be my frenemy?

Authorities say a woman was sitting at the Bremerton ferry terminal using her headphones on Tuesday May 27 when she was struck on the head from behind. After being hit, a man grabbed her iPod and purse and ran. She didn't recognize the man but noticed a tattoo of a triangle on his neck.

The next day, the woman received a Facebook friend request, and she recognized the sender as the same man who robbed her.

How? Well, for one thing investigators say his profile picture displayed a triangle tattoo on his neck.

There is no law against stupidity.