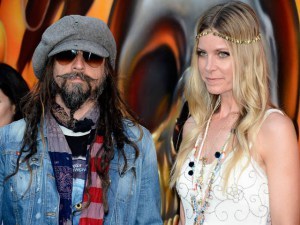 (CBS) HARTFORD, Conn. - The noise is too much for Rob Zombie, rock musician and maker of horror films, so he and his wife want officials to do something about a skate park that recently opened near their home in restful Woodbury, Conn.

According to CBS Connecticut, First Selectman Gerald Stomski said the town is responding to the complaint from Mr. and Mrs. Zombie as it would for any resident.

"We do know the Zombies, on a side note, and they are just normal people like anyone else in our town," Stomski said. About 10,000 people live in the well-to-do small town nestled in Litchfield Hills, known for antiquing.

The town is looking into moving the skate park, which opened in April, but first it's trying to muffle the noise by enclosing the sides of the metal skate ramps, stuffing the jumps with Styrofoam and putting up soundproofing fabric on a fence, said Stomski, according to CBS Connecticut.

Park hours were already reduced and the venue is closed on Sundays.

Zombie, 48, began his career with the '80s shock-rock band White Zombie and has reinvented himself as a contemporary horror film master with "House of 1000 Corpses," its sequel, "The Devil's Rejects," and the recently released "The Lords of Salem."

The station reported that he wrote on Facebook last week that he and his wife are trying to resolve the situation.

"Some really crazy articles have popped up making claims about 'hating skaters' and 'hating children,'" he wrote. "There is a simple matter going on in which we are trying to find a solution that will make EVERYBODY happy."

Stomski said the Zombies were the first to complain about the park, but two other neighbors have since complained.

According to CBS Connecticut, the skate park was opened after two decades of planning at a cost of $53,000, covered partly by the town and partly by fundraising by children and their parents, Stomski said.