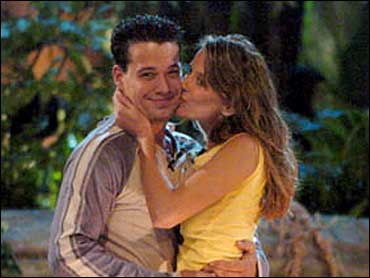 Since winning "Survivor: All-Stars" and getting engaged on national television, Amber Brkich is now beginning to plan for her wedding day, which may become a reality show all its own.

The Early Show correspondent Tracy Smith recently caught up with Amber and fiance, Rob Mariano, to see what's next for "Survivor's" first couple.

Spend a morning with Rob and Amber and they seem like any other young couple, except of course, for one thing.

"What will you be doing at the office today?" Amber asks Rob and with a smile adds. "Oh wait I forgot. You don't have to go to the office."

It was just about two months ago that Amber won both "Survivor: All-Stars" and Rob's heart. He proposed to her on live TV at the show's finale.

What had started as strategy turned into something else.

For Rob, the turning point was clearly when Amber had to go to a different tribe.

"I found myself missing her," he says. "And asking the producers, 'Is she OK?' I realized that I had feelings for her, I think, when she was gone. I missed her. And that's how I knew."

After the show ended and their engagement began, they quickly became America's cover couple. Since then, they've sustained the buzz by making guest appearances all over the country.

Rob adds, "It's a little sickening."

Even though they've done some things solo - Amber posed for the August cover of Stuff - they know the power of two.

Rob notes, "If I'm out somewhere and she's not with me, like, at the store or getting gas or something everybody is, like, 'Where is Amber?' 'Oh my God, did you guys break up or something?' 'Oh my God, where is she?'

Now, they're planning their next joint project, a TV wedding, but they say they feel no pressure to marry before their 15 minutes of fame run out.

"This is marriage," says Rob. "This is not a joke; this is a serious thing. And we want it to be on our terms and our timeframe."

Asked if they have a vision of how it is going to be, Rob exclaims, "Oh yeah. She has a lot visions!"

"I have the entire thing planned in my head," Amber explains. "Beach wedding, no bugs, no rain."

Continuing with her vision, Amber says, "White lights everywhere, minimal color, maybe a little bit of color but not too much – clean, very clean. I want the guys to wear linen pants, very casual. Un-tucked short-sleeved shirts, bare feet if you want, sandals if you want."

And in keeping with the beach theme, they've traded the storm-soaked shores of Panama for the white sands of the Florida panhandle.

And though they are enjoying life, retirement is not something they are thinking about.

Amber says, "A million dollars is a lot of money, but it's not enough to retire on, especially at the age of 25 and 28, so we're being very smart with it."

Soon, they may buy a house. It will be their first big purchase with the money they made on "Survivor." But for them, the game was about more than what you can put in the bank.

Rob and Amber expect to be married within a year and are hoping for three children, the same number that both sets of parents had.