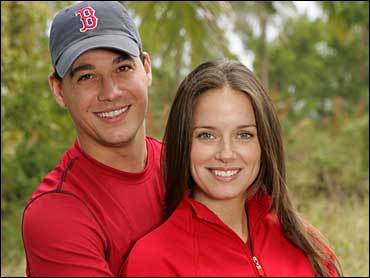 "The Amazing Race" took a dramatic turn Sunday night as the powerhouse reality show couple Rob and Amber Mariano made a series of costly mistakes in Chile and Argentina and ended up being eliminated much sooner than anyone expected.

The couple won three legs in a row and it seemed like they owned "The Amazing Race: All-Stars" until they lost to Charla and Mirna.

The kiss of death was Rob's misspelling of Philippines on a placard by adding an extra L and omitting a P.

"He wrote out Philippines but that doesn't mean it's his fault," Amber told The Early Show co-anchor Harry Smith. "That challenge was all him. I can't blame him. He was definitely in charge for that one."

"I messed up," Rob said. "We had just a bunch of things that snowballed in that leg that led to our downfall. You know, that's the way the race is. One little thing can set you up."

Rob and Amber are known for being tough, conniving competitors and they seemed confident that they would take home the $1 million prize.

Click here to see photos of "The Amazing Race: All-Stars"

"We felt good, we really did. I wouldn't say overconfident," Rob said. "We've been doing this a while, we know how to play it up a little bit. So there was a little of that going on, I think."

"If they don't know what's coming, it's their own fault," Amber said. "There isn't anywhere in the rules that says you can't lie. They're silly to listen to us. Haven't they watched any show we've been on before? You don't trust Amber and Rob."

"Mirna tried to play the martyr up more than a little bit," Rob said.

Even though they lost, Rob and Amber said don't feel badly for them. After all, they spent three weeks in Acapulco.

The couple said that a family is in the near future and they are working on a couple other things they cannot talk about.

"Things are going well," Amber said. "We're coming up on our two-year anniversary. It's been wonderful. We're living in Florida, enjoying it. Every day gets better and better."