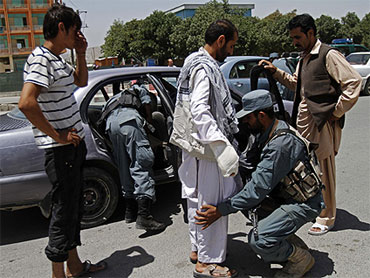 Six Afghan policemen and two U.S. troops were killed Monday by roadside bombs in southern Afghanistan where the Taliban are pushing back against Afghan and international forces efforts to move into the insurgents' stronghold.

Abdul Qayum Khan, the chief of Khakrez district in northern Kandahar province, said the police were killed and four others were wounded while traveling south by vehicle to Kandahar.

NATO said two U.S. service members died in separate blasts in the south, but provided no other details.

The U.S. death toll has mounted in recent weeks as American troops try to extend their reach in the southern provinces of Kandahar and Helmand, while insurgents have mounted a summer counteroffensive aimed at both international troops and the Afghan government.

June was the deadliest month for U.S. and international forces with the deaths of 103 service members, including 60 Americans. Including Monday's deaths, 57 NATO troops have been killed so far this month in Afghanistan, 42 of them American.

The capital city of Kabul has also seen attacks ahead of an international conference on Tuesday, at which the Afghan government hopes to show world leaders it is making progress toward running its own affairs.

Thousands of Afghan soldiers and police have been deployed to secure the capital during the one-day meeting. Officials worry Tuesday's conference will draw a repeat of the violence seen at a national peace gathering in May, when two militants were killed in a gunbattle with security forces and a rocket landed with a thud about 100 yards from the meeting site.

Security breaches have already occurred. Just before noon Sunday, a suicide bombing near a market killed three civilians and wounded dozens. On Friday night, a combined international and Afghan commando unit captured a Taliban bomb-making expert in the capital.

Also in Kandahar, two brothers were killed by an unknown assailant over the weekend, said Mohammad Shah Farooqi, deputy chief of the Kandahar police. He said the men - one who was in the concrete wall business and the other who worked for the Afghan National Army - were shot in a market area of the city.