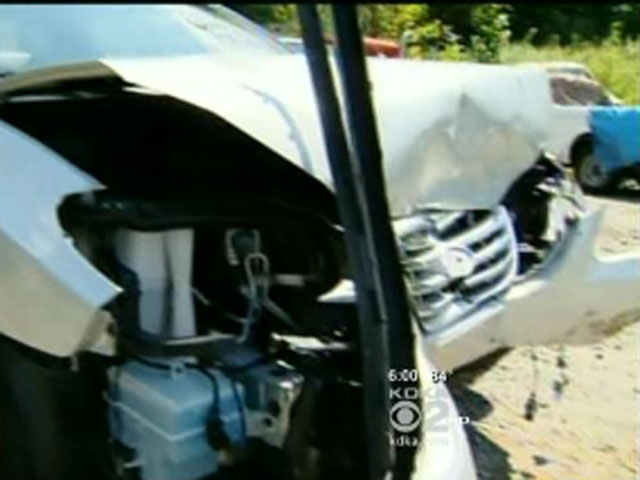 (CBS) HEMPFIELD TOWNSHIP, Pa. - Police say a man who claimed he'd just had an argument with his girlfriend took it out on the road, intentionally crashing his car into another vehicle - twice - after the other driver got under his skin.

James Shaffer, 33, told police he argued with his girlfriend before taking a ride on Route 66 in Hempfield, when the other driver set him off by flashing his high beams and giving him a dirty look, CBS Pittsburgh reported.

Shaffer initially pulled over in his Hyundai to let the Subaru driver pass him, but then rear ended the bigger vehicle, police said.

That was just the first collision.

According to CBS Pittsburgh, the driver of the struck Subaru then pulled over, while Shaffer kept on going in his Hyundai.

Eventually, they both pulled into a church parking lot, where Shaffer got out of his car and started kicking and beating on the Subaru.

The victim was able to put his car in reverse and get away - until Shaffer got back into his car and T-boned the Subaru at a high rate of speed.

But even that wasn't the end of it.

"After the (second) collision, Mr. Shaffer exited his vehicle, went around to the driver's side of the victim's vehicle," State Trooper Steve Limani said.

"The victim was still in his vehicle, he was hurt from the collision that just took place," he continued. "Mr. Shaffer then proceeded to start to physically attack and punch the victim as he was in his vehicle."

A woman living nearby heard the commotion and awakened her husband who went outside in his pajamas to intervene.

Police showed up and took Shaffer into custody.

The driver of the Subaru was taken to the hospital where he was treated and released. James Shaffer is facing aggravated assault and numerous related charges.