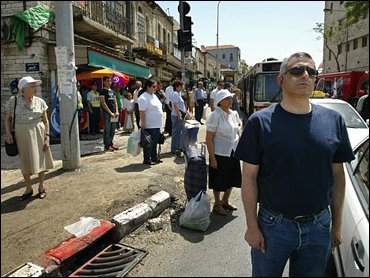 Israelis and Palestinians argued publicly Monday over how to stop 31 months of violence, while a top U.S. envoy urged them to work out their differences as part of their support for a new peace plan.

Ending Palestinian attacks and easing the Israeli military chokehold on the West Bank and Gaza Strip are key points of the first phase of the internationally backed plan, the so-called "road map" to Palestinian statehood within three years.

The plan calls on the Palestinians to disarm terrorist groups, but Palestinian officials say they'll try to persuade these groups to halt attacks against Israel, rather than disarm them, reports CBS News Correspondent Robert Berger.

Israel will accept nothing less from the Palestinians than a "continuous battle against terrorist infrastructure, terrorists themselves, all those that finance them and encourage them," said Israeli spokesman Jonathan Peled.

That would lead to civil war, reply the Palestinians.

Violence continued despite the moves toward peace. After nightfall Monday, Palestinians opened fire on a car in the West Bank between Ramallah and Jericho, killing an Israeli and wounding his 6-year-old daughter and another passenger, the military and rescue workers said.

The paper said Maher Assad, brother of Syrian President Bashar Assad, met in Jordan with Israeli businessman Eitan Bentzur, a former director of the Israeli Foreign Ministry, in March, before the start of the war in Iraq.

Bentzur reported back to Sharon, who decided not to pursue the offer, believing it was designed to improve Syria's standing with the United States, the paper said. Syrian-U.S. tensions increased during the Iraq war, with reports that military hardware was crossing from Syria into Iraq.

Officials in Sharon's office could not be reached for comment on the report.

Traffic came to a halt and people stood respectfully on the streets. Memorial services were held at the Western Wall in Jerusalem and at schools and military cemeteries.

"If they do this, in my view we can reach a situation where we will have almost no terror," he said, adding that Israel would continue its own war against the militant groups.

The dispute over how to deal with the militias is a sign of the deep mistrust between the two sides as international mediators — the United States, European Union, United Nations and Russia — try to promote their peace program.

The road map plan was presented to Israeli and Palestinian leaders last week, immediately after Abbas took power. The decision to wait until Abbas was installed underscored Washington's refusal to deal with Palestinian leader Yasser Arafat.

In coordination with Abbas, Egypt plans to renew its sponsorship of talks with the armed groups, including Hamas, Islamic Jihad and the Al Aqsa Martyrs Brigade linked to the Fatah movement, Palestinian and Egyptian officials said. The first meetings are tentatively set for next week.

Similar talks held earlier this year ended with Hamas and Islamic Jihad rejecting Egypt's proposal of a one-year cease-fire. However, there was some expectation of a different outcome this time because of growing U.S. pressure on Arab countries to stop supporting militant groups.

Burns called on the two sides to settle their disagreements and move on.

"On the Palestinian side, there is absolutely no substitute for a decisive fight against terror and violence. On the Israeli side, it also means taking practical steps to ease the suffering of Palestinians living under occupation, to stop settlement activities and to renew a sense of dignity and hope," he said.