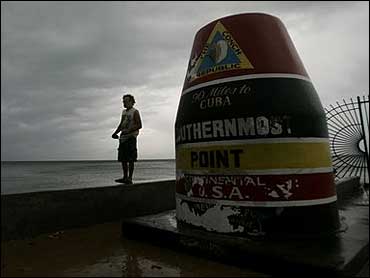 Rita strengthened into a Category 2 hurricane on Tuesday as it lashed the Florida Keys with flooding rain and strong wind, threatening the island chain with a storm surge of up to 6 feet and sparking fears the storm could eventually bring new misery to the Gulf Coast.

Rita promised to continue gaining strength as it crossed the warm Gulf of Mexico for a weekend landfall.

"We think it's going to continue westward for the next couple of days and it has every chance to continue to strengthen. It could become a major hurricane," National Hurricane Center forecaster Richard Knabb said. "We can't rule out a potential direct impact for Louisiana, Texas or northern Mexico. It's just a little too far out to specify just yet, so everyone in those areas should pay close attention to the progress this hurricane."

Officials of Galveston, Texas — nearly 900 miles from Key West — were already calling for a voluntary evacuation. Louisiana Gov. Kathleen Blanco urged everyone in the southwest part of the state to prepare to evacuate.

Hurricane warnings were posted for the Keys and Miami-Dade County. Residents and visitors were ordered to clear out of the Keys, and schools, businesses and public buildings are all closed, reports CBS News correspondent Teri Okita.

"Those who have left say they're not going to underestimate any storm any more," Okita said.

Voluntary evacuation orders also were posted for some 134,000 Miami-Dade residents of coastal areas such as Miami Beach. Thousands of people also were evacuated in Cuba, on the southern side of the Florida Straits.

About 1,300 people were being housed in shelters in Miami-Dade and Broward counties and all three Keys hospitals had been evacuated, Gov. Jeb Bush said Tuesday.

After the sluggish government response to Hurricane Katrina along the Gulf Coast, the governor said more than 2,000 Florida National Guard troops and dozens of law enforcement officers were ready to deal with the storm's aftermath. More than 200 truckloads of ice and water were prepared for delivery to the Keys if needed and helicopters are in place for search and rescue, he said.

"There will be a significant response," Bush said.

At 11 a.m. EDT, Rita was centered about 75 miles southeast of Key West. It was moving west at 15 mph, according to the hurricane center.

Elsewhere along the Keys, parts of U.S. 1, the highway linking the islands, were flooded and impassable, said a sheriff's spokeswoman.

"We have got a lot of flooding, it is literally almost up to our knees. This storm surge is really coming over — there's a 4-foot wall behind these homes and the water is coming over these homes," said Tina Verona of CBS station WFOR, reporting from Marathon.

North of the Keys in Broward and Miami-Dade counties, more than 13,000 customers were without power. Most schools and government offices were closed.

New Orleans Mayor Ray Nagin suspended his plan Monday to start bringing residents back to the city after forecasters warned that Rita could follow Hurricane Katrina's course into the gulf and rupture his city's weakened levees.

Although it appeared Rita would pass by Cuba, schools there were closed Tuesday, as were many offices in the six provinces where a hurricane alert was declared, reports CBS News' Portia Siegelbaum. By Tuesday morning, Civil Defense forces had evacuated 58,250 people, mainly residents in low-lying towns along the northern coast and tourists. Cuba has a policy of mandatory evacuation in areas threatened by hurricanes.

Officials also transferred scores of tourists from a sea-level hotel on a tip of land jutting into the ocean at the Varadero beach resort, east of Havana.

The last hurricane to directly hit Key West was 1998's Hurricane Georges, which slammed the city with 105 mph wind, damaging hundreds of homes.

Crude-oil futures rose above $67 a barrel Monday, in part because of worries about Rita, but dropped back almost to $66 on Tuesday as traders took their profits. About 56 percent of the Gulf's oil production was already out of operation because of Katrina's damage, the federal Minerals Management Service said.