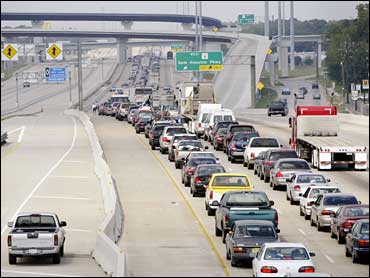 The 14-hour lines of traffic fleeing Houston — complete with cars that ran out of gas — show that four years after the Sept. 11 attacks, it is difficult to evacuate a major metropolitan area.

Experts say the consequences could be far more deadly in the event of a radiological or other terrorist strike.

"The nightmare that we all have is that, God forbid, there's a terrorist attack of some kind on a major American city that requires evacuation without warning," said Sen. Joe Lieberman, D-Conn.

"We need to be better prepared," Lieberman, the top Democrat on the Senate Homeland Security Committee, said on CNN's "Late Edition."

CBS News correspondent Sandra Hughes reports that after the Sept. 11 attacks, President Bush created the National Incident Management System, mandating that every urban area have an emergency management plan. Unfortunately, many cities lack the funds to practice for disaster.

President Bush has ordered the Homeland Security Department to review disaster plans for every major metropolitan area. Experts say the slow pace of evacuations in Houston and New Orleans show the need for changes to get people out of harm's way in a more urgent emergency.

"You have to accept the possibility that a major portion of the people will be left behind," said Roger Cressey, a former anti-terrorism official in the Clinton and Bush administrations. "You may have to write some of them off in far larger numbers than people realize."

Lawmakers said they plan to address the issue.

"You would think four years after 9/11 with billions of dollars spent to improve our emergency preparedness that the response to Katrina would be far crisper, far better coordinated and not marred by failures at all levels of government," said GOP Sen. Susan Collins of Maine, who heads the Senate Homeland Security Committee.

Cressey said there must be plans in place to move the poor and disadvantaged. Thousands of them were left behind in New Orleans after Katrina.

At least two people have died as a direct result of Rita — a man in Texas hit by a falling tree during the storm and woman in Mississippi killed in a tornado spawned by Rita. And 23 people died during evacuation, when a bus carrying nursing home evacuees caught fire.

Experts said authorities must be prepared to turn two-way streets and highways into one-way evacuation routes with maximum traffic flowing out of the city. Many people fleeing New Orleans and Houston were stuck in traffic jams while the side of the highways leading into the city went virtually unused until the end of the evacuation.

"I think we need to fine-tune the planning so that contra-lanes are open earlier so that all the outgoing traffic can go on both sides of a freeway earlier than was done in Rita," said Sen. Kay Bailey Hutchison, R-Texas.

"I think that will be our added lesson for Rita from Katrina," she said on ABC's "This Week."

White House press secretary Scott McClellan on Saturday rejected the notion that there were problems with Houston's evacuation and said the president was told it had gone well. He also stressed that states are responsible for evacuations, although the federal government has a role to assist local officials.

Local preparations vary and in some cases are nonexistent:

New York City officials plan to rely heavily on mass transit to get people out of the city.

Los Angeles officials concede they don't have proper plans for a mass evacuation or shelter for those who are left homeless by an earthquake or terrorist attack.

Washington had a mass evacuation drill after this year's Independence Day fireworks on the National Mall, which revealed some glitches that officials say they are working to fix.

Kansas Gov. Kathleen Sebelius has ordered officials in her state to identify by name everyone likely to be bypassed in an evacuation.

Milwaukee leaders realized they have misplaced their evacuation plan, devised during the Cold War.

"If this isn't a wake up call for real disaster planning, I don't know what will be," Cressey said.

The evacuation before Rita was much more successful than it was in Mississippi and Louisiana as Katrina approached — in large part because citizens seemed to take the danger more seriously after seeing so many people stranded in flooded New Orleans.

"The fact is, we've never had an evacuation this size before: 2.7 million people," said Sen. John Cornyn, R-Texas.

"Maybe that should have been handled on a different time basis, but the good news is that people ultimately did get out," he said. "And fortunately Rita did the rest by taking a right-hand turn and avoiding the major population centers in our state."