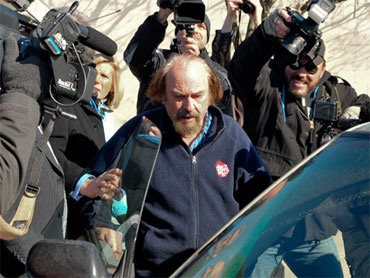 (AP Photo/Jim Shannon)
LITCHFIELD, Conn. (CBS/AP) Rip Torn knows how to party. Prosecutors say the "Men in Black" actor was so drunk when he broke into a bank carrying a loaded gun that he thought he was home, taking off his hat and boots and leaving them by the door.

Now the 78-year-old is free on $100,000 bond and is expected to enter rehab in New York as early as Tuesday, according to his lawyer.

During a Monday hearing, Torn was wearing those same battered boots as he listened to the charges against him: criminal trespass, carrying a gun without a permit, carrying a gun while intoxicated, burglary and criminal mischief. Torn didn't enter a plea.

Photo: Three day sober Rip Torn listens to the charges against him in a Bantam, Conn., court Feb. 1, 2009.

Police say last Friday night, Torn broke into the Litchfield Bancorp branch through a window. Officers responding to an alarm found him wandering in the lobby nearly incoherent.

According to court records, Torn was disoriented, reeked of alcohol and asked the state police troopers repeatedly why they were taking him out of his home.

Officers found a loaded .22-caliber revolver in Torn's pocket, according to court records, and a breath test showed his blood-alcohol content as 0.203 percent - more than twice the 0.08 legal limit for driving in Connecticut.

After making bail, Torn waded through a phalanx of media, smiled and wished onlookers a nice day. He didn't answer any questions.

Torn has tangled with booze and the law before. Last year he was given probation in a Connecticut drunk driving case. He has two previous DUIs in New York.

The actor, whose real name is Elmore Rual Torn, has appeared on the television show "30 Rock" and won an Emmy in 1996 for his work on "The Larry Sanders Show." His recent movie credits include "The Insider" and "Dodgeball: A True Underdog Story."

Torn is scheduled to return to Litchfield Superior Court on Feb. 17.