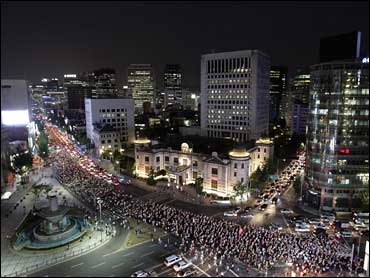 U.S. beef returned to South Korean store shelves Tuesday under a new import agreement that has failed to stem anti-government protests, which have raged for weeks and turned central Seoul into a riot zone.

The government said it would take tough action to stop the increasingly violent rallies, which began two months ago with schoolgirls holding candlelight vigils. But the protests have lately also seen club-wielding demonstrators trying to break through barricades of police buses under showers of water cannons.

"What began as a peaceful candlelight rally has changed in nature to a point where it is difficult to see any purity" in its cause, Prime Minister Han Seung-soo told a Cabinet meeting, according to a government Web site.

This week, a prominent Catholic group joined the rallies, with priests and nuns also protesting at a plaza in front of city hall. Some 3,000 people gathered there Tuesday evening, police said, and no clashes were immediately reported.

American beef went on sale earlier Tuesday without any fanfare and was limited to 440 pounds at a store run by the head of the Korea Meat Import Association.

South Korea was the third-largest overseas market for U.S. beef until it banned imports after a case of mad cow disease was detected in 2003, the first of three confirmed cases in the United States. South Korea's new pro-U.S. President Lee Myung-bak agreed to lift the import ban in April just before a summit with President Bush.

But the move provoked a backlash over health concerns spurred in part by false media reports about risks, along with a sense that South Korea had bowed too easily to American pressure. U.S. meat has been certified as safe to consume by the Paris-based World Organization for Animal Health.

As the protests peaked in June at 80,000 people, the Cabinet offered to resign and Lee reshuffled top aides. Seoul negotiated an amendment to the import deal last month to limit shipments to beef from cattle younger than 30 months, believed less susceptible to mad cow disease.

While the moves appeared to placate some and the number of protesters has declined, the government has expressed increasing concern about raucous demonstrations fueled by groups opposed to the democratically elected Lee, who took office in February.

Left-leaning trade unions and civic groups have criticized Lee for failing to seek public consensus before going ahead with the import agreement. The rallies have also become a platform for activists to voice other complaints about Lee's policy agenda, with some hoisting placards blasting Lee's plans to privatize state-run corporations, build a cross-country inland waterway and strengthen English education.

Prime Minister Han called on authorities to "employ all means allowed by law to root out illegal, violent rallies and restore the order of law."

He also said the nation's economic situation "has worsened by an unimaginable degree" as the rallies were turning away foreign investors and diminishing the country's international standing.

"Anyone can feel that an economic crisis is slowly approaching," Han said.