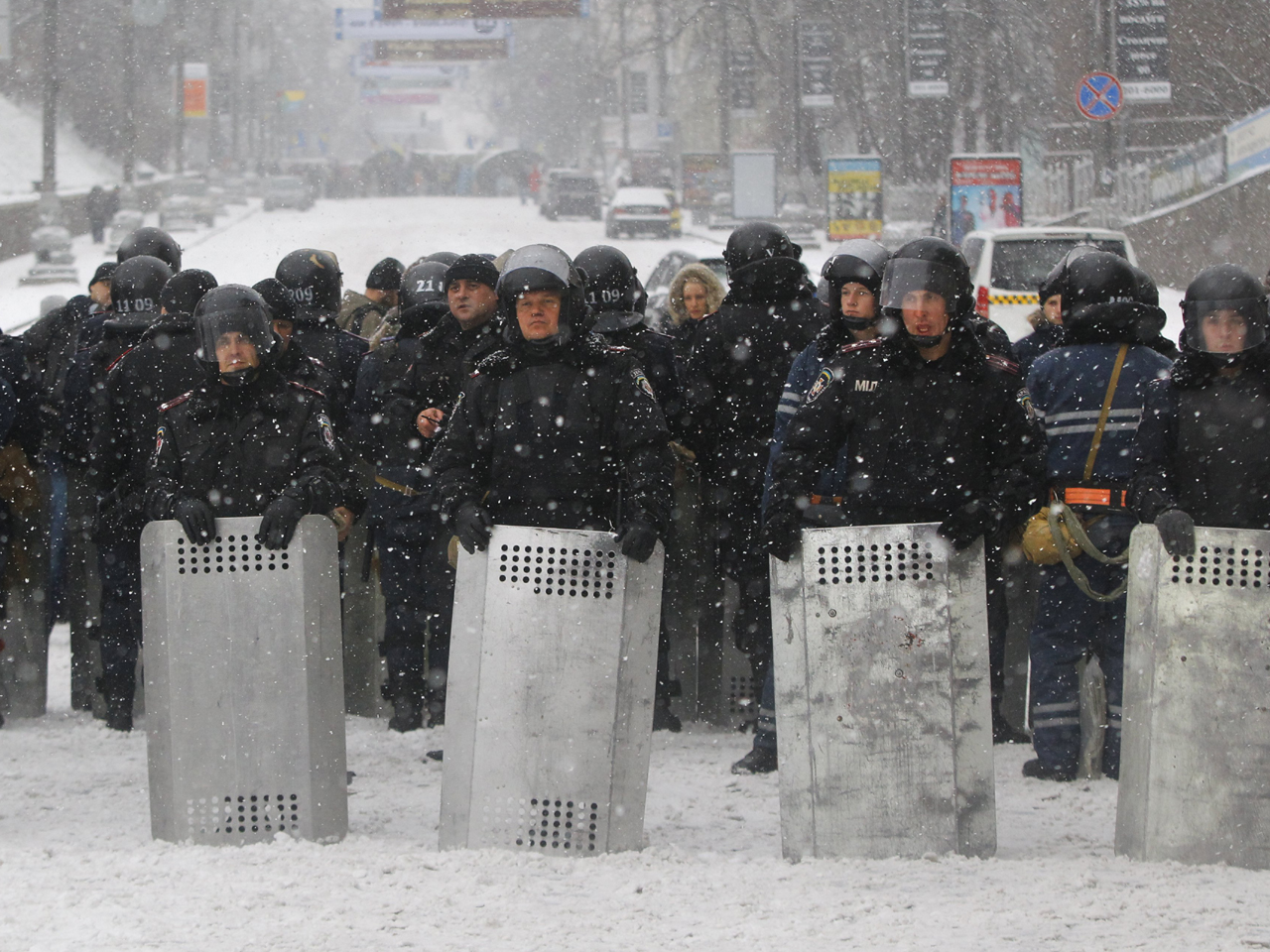 KIEV, Ukraine - Hundreds of police in full riot gear flooded into the center of Kiev on Monday as mass anti-government protests gripped the Ukrainian capital for yet another week, raising fears of an imminent crackdown.

President Viktor Yanukovych has faced weeks of protests after shelving a treaty with the European Union last month to focus on ties with Moscow. The protests were galvanized after police violently dispersed some of the demonstrators. On Sunday, the country saw its largest demonstration since the 2004 pro-democracy Orange Revolution that forced Yanukovych out of the presidency due to voting fraud.

In a surprise move, Yanukovych announced Monday that he would sit down with three former Ukrainian presidents to discuss a way out of the crisis that has paralyzed the country. The European Union's foreign policy chief, Catherine Ashton, was headed to Ukraine to help defuse the tensions.

Wearing helmets and holding shields, Ukrainian police took up positions outside Kiev's city hall on Monday, the deadline a court has set for the protesters who are occupying the building to leave. Protesters have also blocked the entrances to the city's nearby Independence Square, known as the Maidan, which has been the heart of the protests.

At the square, black-robed Orthodox priests sang solemn prayers Monday calling for peace. Some talked to the police.

Some protesters left the city building, fearing a violent police raid, but dozens of more radical activists barricaded themselves inside. They were armed with wood planks, metal rods and bottles of sunflower oil, hoping to make riot police slip if they advanced.

"We won't let anybody into the building," said Vasyl Khlopotaruk, one of the organizers. "But we hope there isn't bloodshed."

Opposition leader Arseniy Yatsenyuk called for calm, telling several thousand protesters on Independence Square that police were ordered not to storm the building but to blockade the protest camp to deplete it of food and other amenities.

"I am turning to all Ukrainians: You must all go to the heart of the Maidan," he said.

Some activists approached police lines, urging officers to come over to their side and even offering them food.

As tensions mounted, Yanukovych announced on his website that he would meet with Ukraine's three former presidents to discuss the situation. No date for the meeting was given.

On Sunday, hundreds of thousands of protesters calling for Yanukovych's ouster poured into the streets of Kiev, toppling a statue of former Soviet leader Vladimir Lenin and blockading government buildings in the escalating standoff with the president over the future of the former Soviet republic of 46 million people.

The protests that erupted on Nov. 21 have had an anti-Russian bent since Moscow worked hard to derail the Ukraine-EU deal, issuing threats of trade consequences if Ukraine went through with it.

Yanukovych's government has demanded that the protesters disperse and threatened harsh measures if they do not.