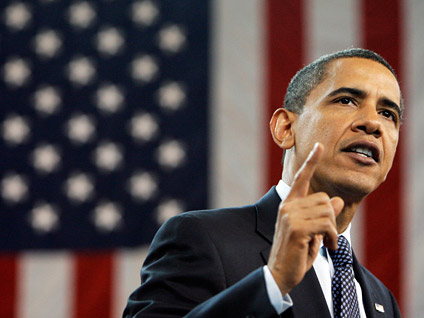 Five people were arrested and a police officer suffered minor injuries Thursday night as riot police clashed with anti-Bush protesters, hitting some with batons and eventually firing pepper spray at the crowd, which had been ordered to move away from the area immediately next to the Portland, Oregon, hotel where President Bush was attending a political fund-raiser.

Protesters hammered on the hoods of police cars Thursday as pepper spray wafted through the air. Earlier in the day, several hundred demonstrators marched toward the Hilton Hotel after Bush's arrival there.

Demonstrators at one point began to disperse, but many returned.

The president's supporters - dressed in formal attire - were jostled and taunted by protesters as they arrived for a fund-raiser for the re-election campaign of U.S. Sen. Gordon Smith. After elbowing through the demonstrators, the VIPs were checked by Secret Service agents before they were allowed inside the hotel.

Police ordered about 500 of the crowd of 1,500 protesters to move out of a barricaded area. Riot police wearing helmets then moved in, pushing demonstrators with their batons. Police then fired pepper spray at the protesters.

"We've have had a number of items thrown at our officers over the past few hours," police spokesman Brian Schmautz said.

Authorities say one police officer injured her wrist when protesters pushed a barricade she was standing near. Two patrol cars were damaged.

Many of the protesters criticized a new forest initiative announced earlier in the day by President Bush that would make it easier for timber companies to cut wood from fire-prone national forests.

"My concern is that he has absolutely no morals about protecting our environment," said Joanne Marron, a teacher with a master's degree in ecology.

"The new policy is classic doublespeak," said Kenneth Kreuschu, 24, also from Cascadia Forest Alliance. "It has been shown time and again that more cutting leads to more fire. The new policy is a hoax."

Some of the activists were worried about a possible war with Iraq.

"I don't think any American boys' lives are worth a barrel of oil," said Rob Moitoza, 57, who carried a sign that said: "Vets Against Bush."

Moitoza said he served two years in the Navy aboard an aircraft carrier during the Vietnam War and fears a much worse conflict if U.S. troops are sent to Iraq.

"If he (Bush) starts a war against Iraq, it will be to get re-elected. All he cares about is wealth and power," Moitoza said.

Mr. Bush did his best to refute any such ideas Thursday, bringing up in one of his speeches his previous call for corporate crooks to serve "hard time" in jail.

Friday may prove to be a little trickier, as he travels to California to campaign for a Republican gubernatorial candidate whose company was fined almost $80 million in July for fraudulent business dealings.

Mr. Bush was asked Thursday if he saw any conflict between his tough rhetoric on corporate crime and his support for Simon.

"Bill Simon assures us that when the courts look at this case, he'll be innocent," said the president. "I take the man at his word."

At the end of July, the investment firm co-owned by Simon and another company was ordered to pay $97.2 million to a man who said the two firms financially wrecked his company.

A day earlier, the same jury had found the two firms guilty of fraud, breach of fiduciary duty and other claims and awarded $22.2 million in actual damages to Edward Hindelang Jr. and his company, which distributes and manages pay phones.

Simon's company, which he founded with his father and brother, was ordered to pay about $79 million of the total. The Republican candidate, whose financial dealings have come under question in the campaign, called the decision "fundamentally flawed" and predicted it would be overturned on appeal.

In support of Simon's assertion of innocence, Republicans point to Hindelang's murky past, which includes a 30-month jail stint in the early 1980s for importing marijuana.

The Bush visit comes a week after Cheney visited California and mentioned Simon's name only once in two speeches and took no photos with him at all - something interpreted by many political commentators as a sign the White House might try to distance itself from the candidate.

As Simon seeks to win the election, perhaps the best hope is how unpopular the current governor, Gray Davis, is. Davis has been blamed for his handling of California's energy crisis: a debacle that caused blackouts, electricity shortages, massive utility bills and economic disruption for the state.

The last public polls showed Davis and Simon close while private polls give Davis an 8 to 16 percentage point edge. But that was before a Los Angeles jury on July 31 found the Simon family investment company guilty of fraud.