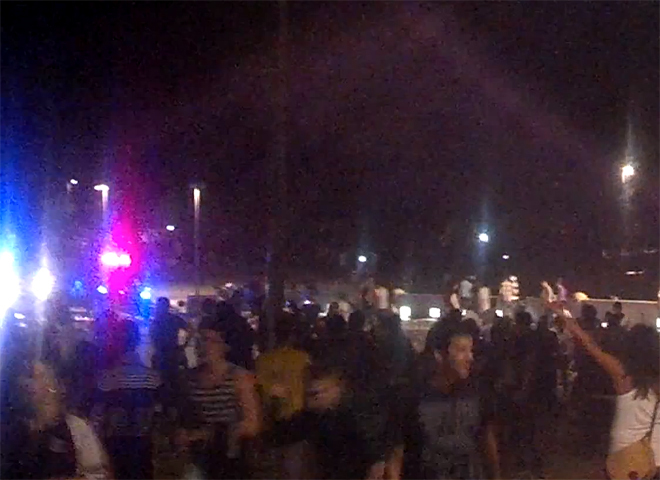 (AP) MADRID - Fans rioted outside a free concert hosted by MTV at a Madrid theater early Saturday after they were denied entry because the venue was full to capacity, officials said. About 60 people sustained minor injuries and 11 others were arrested.

Thousands of people had turned up at the venue late Friday for the lineup of Spanish Indie music acts, police said. Once the theater was full, scuffles broke out in the streets outside and people began throwing bottles.

Riot police, some on horseback, were deployed to the area after garbage containers were set ablaze. Several parked cars were damaged in the unrest and blazing objects were placed in the road to obstruct the arrival of police vehicles. Hundreds of youngsters ran away from the scene as police vans began to arrive, according to video footage on the website of news agency Europa Press.

"I saw thousands of young people blocking roads near the theater as fire trucks and ambulances began to arrive," taxi driver Jesus Gonzalez said after driving past the area at 3 a.m.

MTV said a second free concert planned for Saturday night with a lineup of Spanish pop-music acts would go ahead as planned "in agreement with local police who have volunteered to provide additional security."

In reaction to the riot, MTV said in a statement that "unfortunately, the evening was marred by a riot that occurred outside the venue" and added that it condemned all acts of violence.

The two-day event, in its second year, is called "MTV Madrid Beach." The Metropolitan Police Union said the popularity of the event had caught Madrid city council, a co-sponsor of the event, by surprise.

Publicity posters prepared and posted in advance to advertise the event said, "Once again MTV causes mayhem in Madrid with two days of concerts."