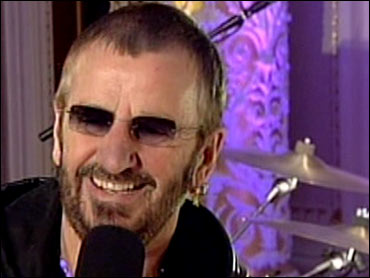 When Beatlemania was in full bloom, so was the swooning of young ladies over the Fab Four.

But who got the most girls? Paul McCartney, John Lennon, George Harrison or Ringo Starr?

"Well," revealed Ringo in an exclusive Early Showinterview from the Beatles' hometown of Liverpool, England Friday. "Paul, actually. Paul the most. Because he was just so darn cute!"

"But, in America,"remarked Early Show co-anchor Maggie Rodriguez, "you were the cute, cuddly, teddy bear."

"I was the one in America," Ringo agreed. "Yes, I was Mr. America. I loved America, because they just went for me, and it was great!"

The album's name refers to the post office designation for the part of Liverpool where Ringo grew up, and the disc is a quasi-autobiography.

Rodriguez told Ringo, "(Fellow co-anchor) Julie Chen and I were watching in the studio, and we got misty-eyed. It's this beautiful, melancholic tour of your life and your career."

"It started with Dave, Dave Stewart," Ringo explained, "and I wrote the song. He had this idea of doing an autobiography. So I just went through what I did. I was a sailor first."

He says the CD depicts "a man's life. I worked on the railways before that, but we couldn't rhyme it with anything. You know. So it's not in!"

That was greeted by laughter from the audience.

"That was my first job," Starr continued. "And then on the boats. And then I was in a factory, like it says. ... And you know the rest."

Being a Beatle was "a lot of fun," Ringo understated. "It was great. And we made great music. You know, I was an only child, and suddenly I had three brothers. So for me it was incredible."

Ringo has been married to actress Barbara Bach for 27 years.

The audience clapped and howled when he was asked it that's his biggest accomplishment, to which Ringo kidded, "You may be clapping, but you don't have to live with her!

"But it's a blessing, you know. I always say, you know, i love the woman, and I'm blessed that she loves me," prompting a long "ahh" from the crowd, made up mostly of college students.

Ringo says John "was an incredible man, and nobody played guitar like he did. Or wrote those songs. He was great.":

Asked by Rodriguez if the odds had improved from the 50 / 50 he;'d given another interviewer recently that he and McCartney would perform together again, Ringo said with a smirk that the odds remained the same, then added, "People still say that. How crazy are they? You're going down the street, and they say, 'Hey, when you getting back together?' Well, it's a bit tough right now!" John and George are, of course, dead.

Ringo says he sees John's widow, Yoko Ono on occasion, most recently in Iceland, where they attended the John Lennon Lights of Peace.

The Diary Of An Iraqi Girl