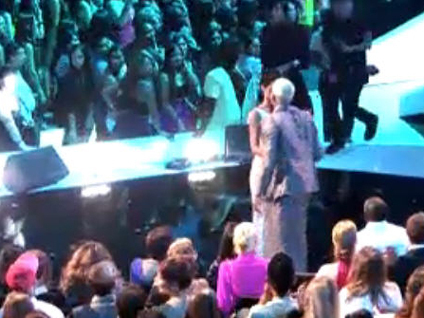 The embrace happened during a commercial break, after the pop star's big win for her hit "We Found Love."

MTV showed the grainy footage shot from a distance on its website Friday. As Rihanna walks off stage, she smiles and reaches out to embrace Brown. She gives him a quick kiss, then tussles his newly bleached blond hair as she exits.

The two singers split in 2009 after Brown attacked her, leaving her bruised and battered. She recently told Oprah Winfrey she still has feelings for Brown, though the two are not involved.

"I truly love him," she told Winfrey during an interview last month, adding, "The main thing for me is that he is at peace. I'm not at peace if he is unhappy or he is still lonely. I care."