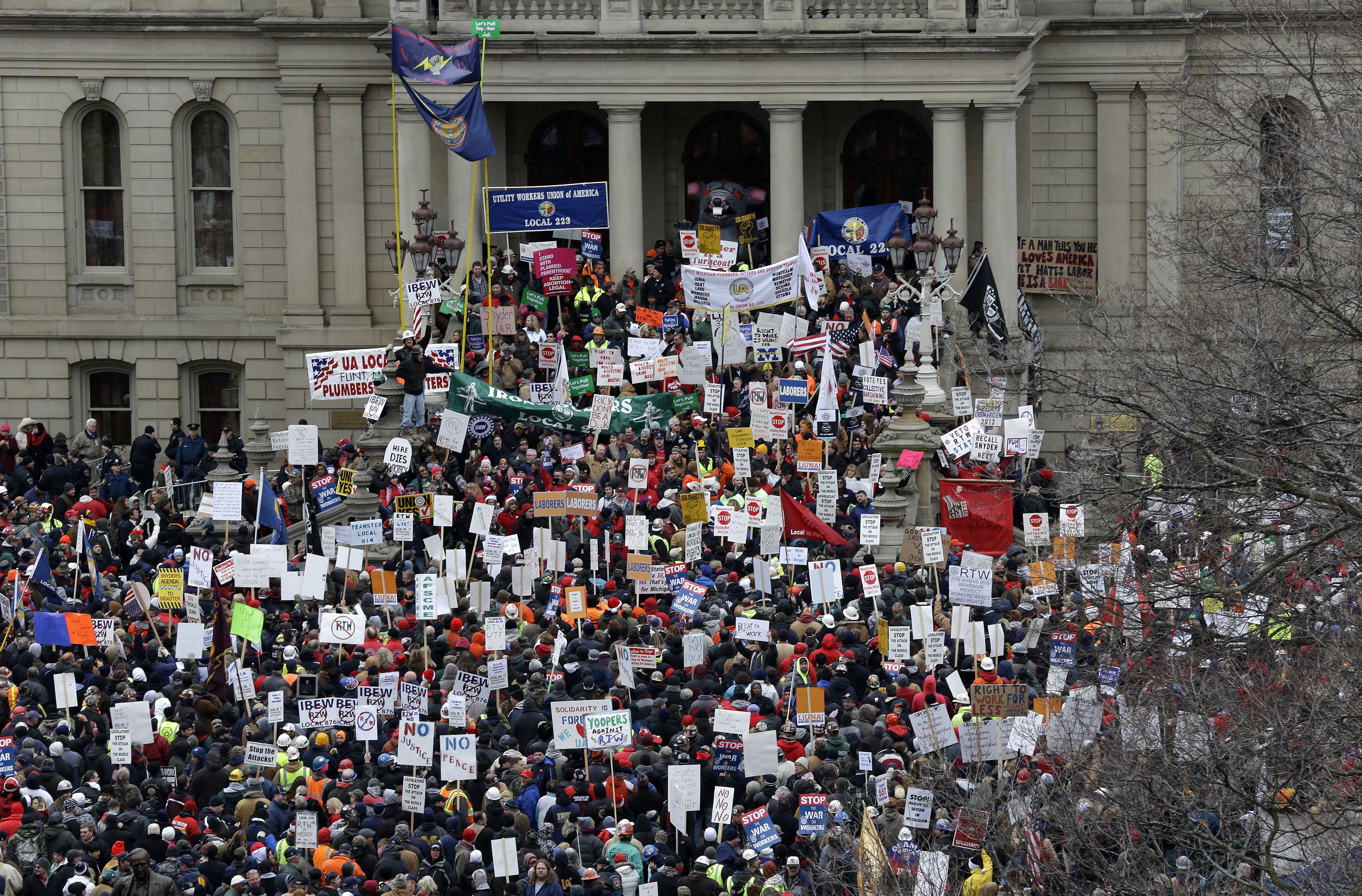 Against a backdrop of raucous protests in the Michigan capitol, Republican Gov. Rick Snyder signed into law controversial right-to-work legislation after final passage in the GOP-led state legislature.

The Michigan house passed two right-to-work laws earlier in the day - one focused on public sector workers, and one focused on private-sector workers - as protesters supporting unions chanted "shame on you" and "union busting is disgusting." The bills passed the Republican-led Michigan Senate last week, and Snyder signed them late Tuesday.

Right-to-work laws make such agreements illegal. Proponents say they give workers more freedom and are good for business; opponents say they are designed to shrink unions so they have less leverage in fighting for better wages, benefits and working conditions.

President Obama on Monday called the Michigan legislation "right to work for less money" and said lawmakers shouldn't be trying "to take away your right to bargain for better wages."

But Michigan Republican Gov. Rick Snyder, who long maintained that right-to-work was not on his agenda, has been adamant in his support for the legislation, which he says will create jobs. "It's about being pro-worker, it's about giving freedom of choice to workers," Snyder told MSNBC.

MLive reported Tuesday that an estimated 10,000 protesters descended on the Capitol Tuesday morning, with state police limiting access to the Capitol building after it reached its 2,000 person capacity.

Though most protesters opposed right-to-work, there were some supporters present as well -- many affiliated with the conservative advocacy group Americans for Prosperity. The Michigan branch of that group said in a statement that the legislation reflected "a pro-growth policy that can and will help to turn Michigan's economy around." The tent erected by Americans for Prosperity at the protests was torn down by opponents of the legislation.

Before Snyder signed the legislation, Michigan state Rep. Douglas Geiss said Tuesday that "there will be blood" if they become law.

"We are going to undo 100 years of labor relations," Geiss said.

The Michigan House Speaker, Republican Jase Bolger, said the legislation was about helping workers, not hurting them.

The legislation is particularly significant in Michigan because it is considered the symbolic heart of the labor movement. "Sit down" strikes in Flint in the 1930s launched the United Auto Workers as a major power and led to the unionization of the U.S. auto industry.

Right-to-work opponents fear that passage in Michigan will spur moves to pass such laws in states like Wisconsin and Ohio that will further weaken an already sputtering labor movement. Over the past half-century, the percentage of American workers in a union has declined from 30 percent to less than 12 percent.

Rev. Jesse Jackson was among the protesters who sat on the floor of the Capitol building during the House votes. After the bill passed, protesters chanted "veto" and "the people united will never be defeated" as state troopers guarded entrances to the House and Senate chambers. Outside, protesters held signs reading "union strength is a family value," while inside they sang "solidarity." The Detroit Free Press reported that a trooper used pepper spray on one protester outside the Capitol.

Unions are vowing to consider pursuing recall bids against lawmakers who voted for the bill, including Snyder. That could mean a repeat of the recall fight that took place after Wisconsin passed controversial anti-union measures last year, though the first-term governor already faces reelection in 2014.