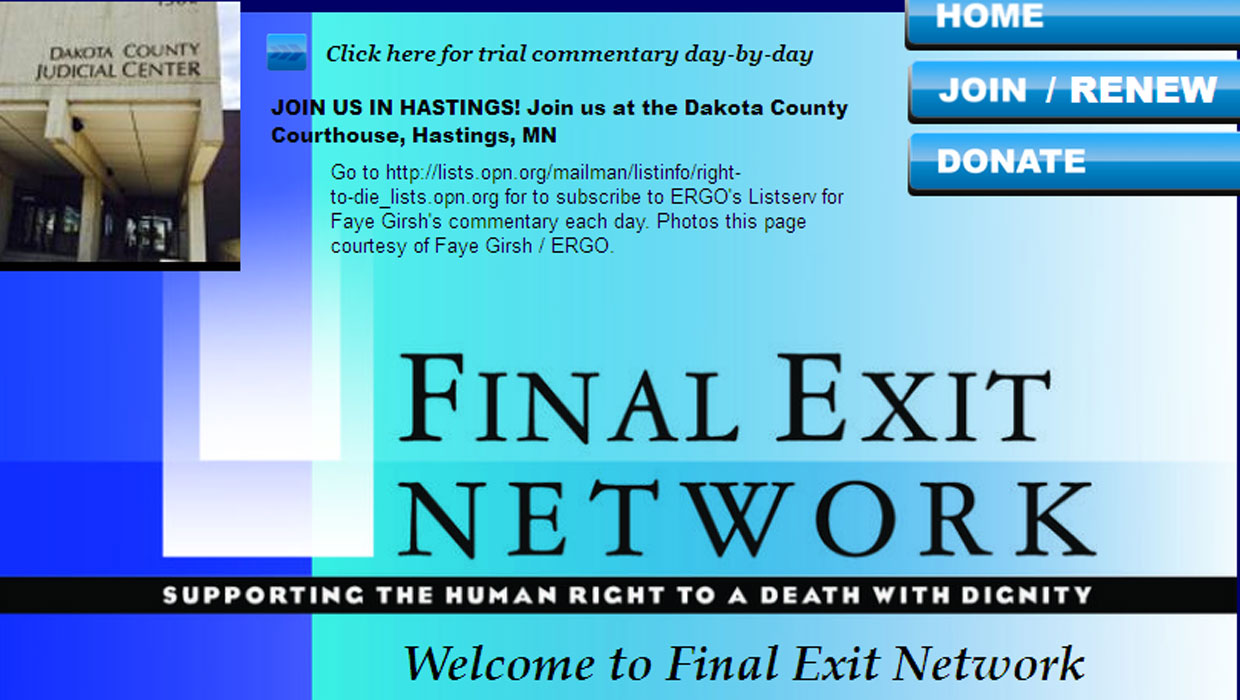 HASTINGS, Minn. -- The national right-to-die group Final Exit Network Inc. was convicted Thursday of assisting in the suicide of a Minnesota woman who took her life in 2007 after years of suffering with chronic pain. Jurors also found the group guilty of a lesser charge of interfering with a death scene.

The group faces a maximum fine of $33,000. Sentencing has been set for August.

Final Exit Network was charged in the death of Doreen Dunn, 57, of Apple Valley, who had been living with intense pain for more than a decade after she had a bad reaction to a medical procedure.

Prosecutors argued at trial that Dunn didn't know how to take her life until agents of Final Exit Network provided her with a "blueprint" to commit suicide.

"They go beyond simply advocating a person's right to choose," Dakota County prosecutor Phil Prokopowicz told jurors during closing arguments. "This is an organization that directly connects to its members and provides them with the knowledge and means to take their own life. And in the state of Minnesota, that is where the line is crossed."

Defense attorney Robert Rivas had argued that there was no evidence that Final Exit Network did anything illegal, and the group is careful to stay within constitutionally protected speech. He argued that the group, incorporated in Georgia, provides people who choose to end their lives with emotional and philosophical support, and lets them know "they've got a friend."

To convict the group, jurors had to find that agents of Final Exit Network intentionally assisted Dunn in taking her life. In Minnesota, that assistance can include physical conduct or speech, provided the speech is aimed at giving a specific person instructions on how to end his or her life. Speech isn't considered assisting if someone is just sharing a viewpoint or providing support.

According to trial testimony, Dunn's husband arrived home on May 30, 2007, to find his wife dead on the couch. The family and medical examiner initially thought she died from natural causes. But information uncovered during a 2009 investigation in Georgia revealed that Dunn had joined Final Exit Network and that two other members - Jerry Dincin and Dr. Larry Egbert, the group's former medical director - were with her the day she died. Equipment she used to take her life by helium asphyxiation, the group's preferred method of suicide, had been removed from the scene.

Dincin died in 2013, and Egbert, 87, of Baltimore, was granted immunity for his testimony in the trial against Final Exit Network.

Former Final Exit Network president and founder Thomas Goodwin testified that the group agrees to support someone during a "self deliverance" only when that person is suffering from unbearable pain and meets other criteria.

Goodwin testified that "exit guides" would sometimes provide information on where someone could obtain equipment to commit suicide by helium asphyxiation and even have a rehearsal to show someone how to properly set up the gear. But he said the group's founders were aware of various assisted-suicide laws and "would push the envelope" but were careful to "stay within the law as we knew it."

The Minnesota decision isn't binding in other states, but Rivas has said the outcome could influence whether or not prosecutors decide to pursue charges elsewhere. An earlier case against four Final Exit Network members in Georgia was tossed out after that state's Supreme Court ruled in 2012 that its assisted-suicide law was unconstitutional. Egbert was acquitted of a manslaughter charge in Arizona in 2011; three others pleaded guilty to minor counts that resulted in no jail time, Rivas said.