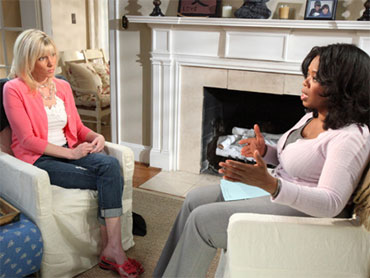 Rielle Hunter, John Edwards' one-time mistress and the mother of his love child, said on "The Oprah Winfrey Show" that she doesn't think she's a home wrecker. Hunter said there were issues in the marriage of the former presidential candidate and ex-North Carolina senator to Elizabeth Edwards before Hunter came along.

But Diane Dimond begs to differ.

Dimond, a special correspondent and investigative reporter for "Entertainment Tonight," has been following the Edwards-Hunter story closely since it surfaced.

Dimond told "Early Show" co-anchor Maggie Rodriguez Friday she thinks Hunter is, too, a home wrecker, and is "delusional."

Edwards first admitted two years ago that he had an affair with Hunter. In January, Edwards admitted he and Hunter have a 2-year-old daughter. He'd initially denied it. He and Elizabeth Edwards are now separated. Elizabeth suffers from terminal cancer.

The status of the Hunter-Edwards relationship is unclear. Hunter said in a GQ magazine piece that accompanied a controversial photo spread last month that the affair ended in July 2008. On Thursday, Hunter wouldn't tell Winfrey the current nature of the relationship, calling it private, but said she thinks he still loves her. Edwards is providing support to both her and their daughter, Hunter added.

Hunter also told Winfrey she and Edwards didn't use birth control, and that the two did indeed make a sex tape.

Dimond added that Edwards knew full-well a sex tape was being made, saying, "I have talked to people who have seen the tape and there is no doubt the camera is trained right on him. So he knew. He played to the camera."

Dimond watched the Thursday interview with a cynical eye.

"(Hunter) talked a lot about truth and reality -- and all the while living a lie," Dimond observed. "I just kept thinking in my mind this is a delusional woman. She does not live on the same sort of plain that I do. I looked at her body language - (it) was very sort of Zen-like and Earth mother, and everything's just fine. Well, it's not fine. You know, there's a whole household back at the Elizabeth Edwards house that is devastated by this. She doesn't seem to think that she's responsible. She doesn't think she's a home wrecker. But in fact, she is."

Dimond said she saw Hunter as confirming "everything" in a tell-all book by former Edwards campaign aide Andrew Young. "I was so surprised," Dimond noted, "when Oprah said, 'And so, it was a sex tape?' 'Yes, it was a sex tape.' 'And he took his vows with Elizabeth even though he had just learned you were pregnant?' 'Yeah.' 'What did you think?' 'Well, it hurt.' But she still loves him. And in matters of the heart, how you can explain it, but I just -- I thought she was kind of a self-justifiable person."

Rodriquez pointed out that, "A lot of people came away with a bad image of (Hunter), especially after that GQ (photo) shoot where she posed in that men's shirt, with all those stuffed animals around her. and no pants. I was thinking maybe this was an attempt to rehab her image."

"I've covered these kinds of stories for a long time," Dimond remarked, "and in any of these big public dramas, everybody's got to at some point spill their guts. Andrew young wrote a book. (Hunter) went to GQ. That kind of bit her in the you-know-what, because of those pictures. and so now, what else did she have left to do but to talk to the queen of talk, Oprah? And I think this (the Winfrey sit down) was really important to her. Even John Edwards, whom she still loves and (she) says loves her, said, 'Please don't do this interview,' and she did it anyway.

"I wonder if it wasn't in part so that her daughter would have a record of somebody, somebody saying something nice about her daddy."