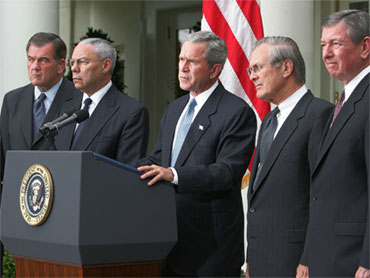 Former Homeland Security Secretary Tom Ridge said Monday people "are hyperventilating" about his assertion that politics played a role in talk of raising the terror alert before the 2004 elections.

"A consensus was reached. We didn't go up. The process worked," Ridge said in an interview on ABC's "Good Morning America."

The former Pennsylvania governor, however, did not take back the statement in his new book, "The Test of Our Times: America Under Siege" (Thomas Dunne Books) that he worried at the time that politics was a consideration in discussions among high-level officials about whether to raise the color-coded terror alert to a higher level.

He acknowledged there was a lively debate about it, but repeated that it was not done, and thus not an issue.

In his book, Ridge writes that Attorney General John Ashcroft and Defense Secretary Donald Rumsfeld pressed him right after Osama bin Laden issued a videotape threatening new attacks on the United States to boost the terror-alert level, right before the 2004 election.

Ridge said there was "no support" within his department for boosting the threat level in the days before President George W. Bush stood for re-election against Massachusetts Senator John Kerry, and he refused.

In the book, in which he noted polling showed a significant increase in President Bush's approval ratings when the terror alert level was raised, he wrote, "I wondered, is this about security or politics?"

Ridge dismissed the assertion in a July 2008 interview, but he now writes that he was so disturbed by what happened in 2004, it reinforced his decision to resign from the Bush administration.

"I believe our strong interventions had pulled the 'go up' advocates back from the brink," Ridge wrote. "But I consider that episode to be not only a dramatic moment in Washington's recent history, but another illustration of the intersection of politics, fear, credibility, and security."

Ridge said today his concern at the time of the internal Bush administration discussions was to be "absolutely certain" that divergent points of view were heard and that people had their say.

"A lot of people are hyperventilating about that passage, even though there's about 300 pages and it's a historical reflection what I think we did right on these steps, what I think we had to do in the future, pure and simple.

"This was one of several times that the process worked," Ridge said, about the discussions involving the administration's high-ranking officials. "It was designed so that nobody could pressure anybody to do anything. A consensus was reached: We didn't go up." 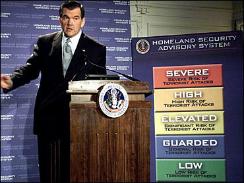 On another matter, he said he agreed with former Vice President Dick Cheney's criticism of the Obama administration's decision to conduct a review of terrorism-era detainee interrogation practices during the Bush years.

Ridge said he thought it "would be criminal" for the new administration to seek to prosecute people who likely believed they were acting within the law and with proper authority at the time the interrogations were carried out.