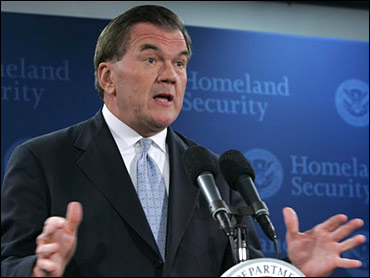 (AP)
Tom Ridge is opening up about his time as the nation's first Secretary of Homeland Security during the Bush Administration. He has a new book coming out in a few weeks, and the details are starting to come out now.

The most striking claim is that Ridge says he was pressured by Secretary of Defense Donald Rumsfeld and Attorney General John Ashcroft to raise the security threat level on the eve of the 2004 election.

The Pittsburgh Post-Gazette, which received an advance copy of the book, writes more about the incident:

Osama bin Laden had released a videotape with one more ominous sounding but unspecific threat against the United States. Neither Mr. Ridge nor any of the department's security experts thought the message warranted any change in the nation's alert status.

"A vigorous, some might say dramatic, discussion ensured. Ashcroft strongly urged an increase in the threat level and was supported by Rumsfeld."

Noting the correlation found between increases in the threat level and the president's approval rating, Mr. Ridge writes, "I wondered, 'Is this about security or politics?'"

The dispute remained open at the end of the call. Mr. Ridge's aides carried the word to the White House staff that the threat escalation would court accusations of politicizing national security. Mr. Ridge's view finally prevailed.

"After that episode, I knew I had to follow through with my plans to leave the federal government for the private sector," he writes, according to a press release from the publisher.

According to the publisher, Ridge and his co-writer Larry Bloom, lay out several of Ridge's frustrations during his experience working in the government in the book, which is titled "The Test of Our Times: America Under Siege…And How We Can Be Safe Again."

For example, Ridge says that Department of Defense would engage in turf wars with the new department, that Rumsfeld would rarely meet with him and that he was excluded from National Security Council meetings. He also says he often blindsided in his daily morning meetings with President Bush because the FBI had not shared information with him.

Of particular interest is also what Ridge writes about FEMA and precursors to the response to Hurricane Katrina in 2005. Ridge says he recommended to his successor, Michael Chertoff, that he reconsider appointing Michael Brown as head of FEMA. He also said his idea to establish regional Homeland Security offices, including one in New Orleans, was rejected. 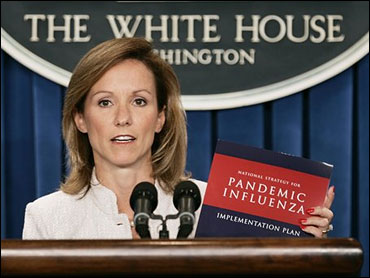 (AP Photo/Ron Edmonds)
In addition to the threat level episode, Ridge also describes another incident where he was pressured by the White House. He says Bush homeland security and counterterrorism adviser Fran Townsend, at left, asked him to insert text into a speech that would link homeland security to "defensive measures…away from home" -- which meant Iraq.

Fransend responded to the allegations to The Atlantic's Marc Ambinder, who is CBS News' chief political consultant. Townsend told him that Ridge had sent the speech in question to the White House, asking for advice.

"So I called him said, here's what I think should go in it. It wasn't an order. I didn't regularly see his speeches in advance. He made speeches all the time without running it by us," Fransend said.

Ambinder also reports that Townsend responded to the claims that electoral politics ever played a role in raising or lowering the threat level, saying Ridge is "absolutely wrong."

It was Townsend who established the process that led to the Homeland Security Council making recommendations to President Bush. The meetings, she said today, were often intense, and cabinet secretaries often disagreed with one another. (Incidentally, Karl Rove was never in any meeting to discuss the threat level, according to Townsend.)

After the debate, Townsend would bring the counsel's consensus recommendation to President Bush. "Never in almost five years at the White House was I aware of the president doing anything but accepting the recommendation of the council," she said. "Politics played no part in any discussion of the council. And I think the president was better served by virtue of the debate that took place."