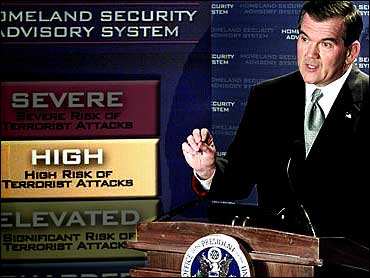 It will be years before the United States is fully prepared to deal with the inevitable next terrorism attack, homeland security director Tom Ridge says.

America would be "far, far better prepared tomorrow" than it was a year ago if terrorists attacked with, for example, biological agents, Ridge said Wednesday.

But, he said, "I'm not going to tell you that we would be prepared to the level that both the president and the country desires.

"It is going to take us several years to develop the capacity that we always will have to sustain in terms of being able to equip all of our major metropolitan areas with the kind of response capacity that they need to go forward," he said.

Asked whether another terror attack is inevitable, Ridge said, "The answer is yes."

Ridge next week goes on his first major trip to Europe as chief of the White House's Office of Homeland Security. He travels to Belgium, Holland and England to meet with world leaders and survey American efforts to secure ports processing U.S.-bound cargo.

"It is a global problem," Ridge said as he previewed the trip for European reporters. He spoke in the Wardroom, a cramped conference room in the basement of the White House West Wing. "There are global vulnerabilities and we need global solutions, and it's to that end that we engage the broader community."

In Belgium, Ridge plans to talk on Monday with European Union commissioners and EU foreign and security policy chief Javier Solana. He will also meet with NATO Secretary-General George Robertson and attend a session of the North Atlantic Council, NATO's political authority.

In the Netherlands, Ridge on Tuesday is seeing Dutch Prime Minister Jan Peter Balkenende and touring the port at Rotterdam to inspect the newly inaugurated Container Security Initiative, in which American customs agents screen high-risk U.S.-bound cargo before it leaves foreign ports.

In London on Wednesday and Thursday, Ridge sits down with members of the British government and security agencies and gives a speech at Kings College.

But Ridge's trip was largely meant to gather information and build relationships with other leaders on security issues.

"As I take a look at Europe and the history that our allies have had with terrorism, I don't think they need any message on terrorism from the assistant to the president on homeland security," Ridge said. "They've had to deal with the death and destruction of terrorism in many instances for literally decades."

Ridge's trip comes at a time when the administration's centerpiece domestic-security initiative has stalled at home.

President Bush proposed a sweeping reorganization of the government to create a Department of Homeland Security, plucking existing pieces of the federal bureaucracy into a new agency that would have 170,000 employees. The Democratic-controlled Senate has refused to go along by passing legislation that would establish the department.

The Senate and the administration are locked in a dispute over labor protections for the department's workers. Under the Senate Democrats' proposal, before the president could waive union rights for workers in the new department, a worker's job would have to change substantially. Also, a majority of workers in that unit would have to be involved in terrorism-related investigative or intelligence work. President Bush says those rules would impair his ability to move swiftly against terrorists.

Ridge said that whether Democrats or Republicans control the Senate after Tuesday's elections, he is optimistic that the Senate will give Mr. Bush the department he wants in coming weeks.

"I'm optimistic in the weeks ahead that the Senate will do the right thing," Ridge said.

"I still want to believe in my heart of hearts that senators know that the president should retain his national security authority," Ridge said. "In their heart of hearts, they know he has to have the flexibility to move people and resources around."