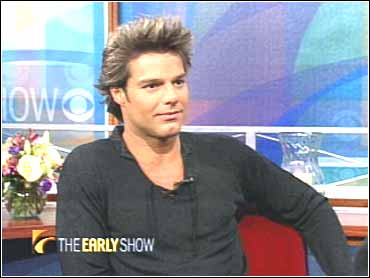 On his first visit to the Middle East, Ricky Martin declared he will try to change negative perceptions of Arab youth in the West.

"I promise I will become a spokesperson, if you allow me to, a spokesperson on your behalf. I will defend you and try to get rid of any stereotypes," the 33-year-old singer told youngsters from 16 mainly Arab countries at a youth conference on Monday.

The children, ages 14 to 16, expressed concern about being labeled as "terrorists" by the West.

"I have been a victim of stereotypes. I come from Latin America and to some countries, we are considered 'losers,' drug traffickers, and that is not fair because that is generalizing," said Martin, who was born in Puerto Rico.

"Those comments are made out of ignorance and we have to sometimes ignore the ignorant, but we also have to educate the ignorant. You have me here as a friend," he said.

Martin, who is a United Nations Children's Fund goodwill ambassador, said he wanted to get to know the youth and their cultures better.

He said he planned to do a concert tour of the Mideast and North Africa, including Jordan and the Palestinian territories, tentatively scheduled for May 2006.

Martin, whose hits include "She Bangs," "Shake Your Bon-Bon" and "Livin' La Vida Loca," posed for photos with fans, at one point draping over his shoulders a traditional Palestinian kaffiyeha scarve with the slogan "Jerusalem Is Ours" written in Arabic on it.

Martin attended the silver jubilee of the Arab Children's Congress set up 25 years ago by Jordan's Queen Nour, King Hussein's widow, to promote creativity, peace, cross-cultural understanding and tolerance. He said he would like to promote a similar youth congress for his native Latin America.

Martin said he would travel later Monday to Thailand where his organization, the Ricky Martin Foundation, had built 225 homes to protect children orphaned by the Dec. 26 tsunami that swept through South Asia.

"I couldn't stay at home with my arms crossed," he said.