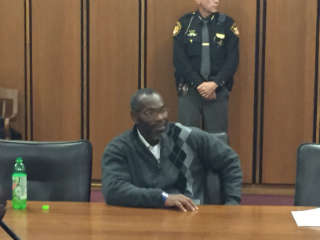 CLEVELAND -- After nearly 40 years in prison, a man convicted in a 1975 Cleveland slaying walked out of the county jail as a free man.

Ricky Jackson, 57, was dismissed from the Cuyahoga County jail and walked out of the adjoining courthouse Friday about an hour after a judge dismissed his case. The dismissal came after the key witness against Jackson and brothers Wiley and Ronnie Bridgeman at trial, a 13-year-old boy, recanted last year and said Cleveland police detectives coerced him into testifying that the three killed businessman Harry Franks the afternoon of May 19, 1975.

"Finally, finally," Jackson said Friday morning as he took his first steps as a free man.

Cuyahoga County prosecutors on Thursday filed the motion to dismiss all charges against the three men.

When he dismissed the case, Cuyahoga County Common Pleas Judge Richard McMonagle told Jackson, "Life is filled with small victories, and this is a big one."

Wiley Bridgeman, 60, was also scheduled to appear in court Friday. Ronnie Bridgeman, 57, who is now known as Kwame Ajamu, was released from prison in January 2003.

As he exited the building Friday, Jackson said, "The English language doesn't even fit what I'm feeling. I'm on an emotional high."

Ajamu was in the front row at Jackson's hearing.

Ajamu said in an interview Thursday that the prospect of the three being together again is "mind boggling." Ajamu spent his 18th birthday on death row and was in prison when his mother, a brother and a sister died.

"The idea that my brother- both of those guys are my brothers - are getting out? I don't even care about me," Ajamu said.

The Bridgemans' death sentences were commuted to life in prison after the U.S. Supreme Court outlawed capital punishment in 1978. Jackson's sentence was commuted in 1977 on a technicality - a mistake in jury instructions.

The three-year process that led to their exonerations began with a story published in Scene Magazine in 2011 that detailed flaws in the case, including Eddie Vernon's questionable testimony. Vernon, now 52, did not recant until a minister visited him at a hospital in 2013. Vernon broke down during a court hearing for Jackson on Tuesday as he described the threats by detectives and the burden of guilt he had carried for so long.

Joe Frolik, a spokesman for county prosecutor Tim McGinty, declined to comment on Thursday except to reiterate a statement McGinty made Tuesday: "The state concedes the obvious."