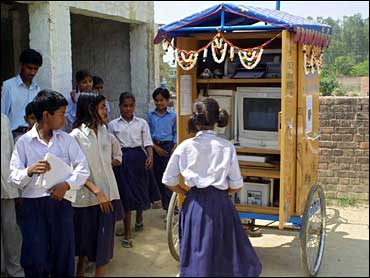 For 12-year-old Anju Sharma, hope for a better life arrives in her poor farming village three days a week on a bicycle rickshaw that carries a computer with a high-speed, wireless Internet connection.

Designed like temple carriages that bear Hindu deities during festivals, the brightly painted pedal-cart rolls into her village in India's most populous state, accompanied by a computer instructor who gives classes to young and old, students and teachers alike.

"By using computers, I can improve my knowledge," Sharma, whose parents plan to pull her out of school at 15, said in Hindi, before joining a class on Web cameras. "And that will help me get a job when I grow up."

The bicycle cart is the center of a project called "Infothela," or info-cart. It aims to use technology to improve education, health care and access to agricultural information in
India's villages, where most of the country's 1.06 billion people live.

Conceived in 2003 by the Indian Institute of Technology in Kanpur, about 10 miles southwest of Bithoor, the project is funded by the national government and provides free computer classes in six villages here in Uttar Pradesh state.

Another computer on a pedicab is being used in an experiment to help doctors in Lucknow, the state capital, provide consultation to villagers through video-conferencing in nearby Saroha village. A project to disseminate the latest crop prices and farming methods is also being developed.

In Bithoor, on the banks of the Ganges River in northern India, manual labor is the alternative to farming and annual incomes rarely exceed $130. Sharma's teachers make only $11 a month. Young people look for jobs in cities, but often lose out to better-educated urbanites.

"Computers and Internet open up new opportunities for these villagers," said Lalty Dutta, a project official.

With only 12 computers and four Internet connections per 1,000 people, India has one of the world's lowest Internet usage rates and much of rural India remains oblivious to the sweep of technology. But the villages involved in Infothela all lie within a 50-mile wireless corridor created by the Institute of Technology and linked by high-rise Wi-Fi antennae and amplifiers along the highway.

Until recently, such technology was the privilege of a tiny section of Indians - engineers in the country's software hubs who earn more money while in their twenties than Bithoor farmers do in a lifetime.

India churns out 300,000 engineers each year and is a growing software power, but farmers are the backbone of its economy. Infothela seeks to break the disparity that confines access to technology and growing affluence to the cities.

Many Indian villages are poorly wired - telephone lines can go dead for weeks at a time - making wireless technology the most reliable Web connection.

The mobility of a cycle rickshaw, which is light enough to cross muddy, potholed roads, ensures that the same computer and Internet connection can be used by people in several neighboring villages. The Infothela cart has a specially designed frame and cushioning to protect the computer and accessories from the bumpy ride.

"The mobile platform is necessary to reduce cost of ownership because the resources are shared by a larger population. It is also necessary to push information to women and elderly people who can't travel outside their village," said Manoj Kumar, a project manager.

The service is free for now, but fees will eventually be charged, Kumar said.

A few miles from Bithoor, another cycle rickshaw carries its high-tech load to Gorahah village, where men and women gather side-by-side for a class on electronic mail. The mix is nothing short of a revolution in tradition-bound rural India, where women are often kept indoors.

"We are now learning computers. There is no point if we can't use that new knowledge. We have to go out and do something worthwhile," said Snehalatha, 22, who also attends college.

Clad in orange pants and a pink tunic, Snehalatha signs up for Yahoo mail, as an impatient queue lengthens behind her.

The classes teach the basics of computing, word processing, spreadsheets, Internet browsing and Web cameras. Once they learn own to use a webcam the villagers can take part in online classes, something the info-cart organizers hope to implement later.

The simple lessons are a big privilege in an Indian village, where half the population can't read or write.

In Bithoor, which is mired in tradition and poverty, Sharma's parents plan to take her out of school in about three years, so she can be trained in domestic chores and married by 18.

But a brush with computers has made Sharma look beyond cooking and washing.

"I want to work and make a name for myself. I want to see the world," she said, adding that she hopes to get a job in the city and then travel more widely.

Sharma said she has not disclosed her plans to her parents lest they stop her from attending computer classes, "But I know what I will do."