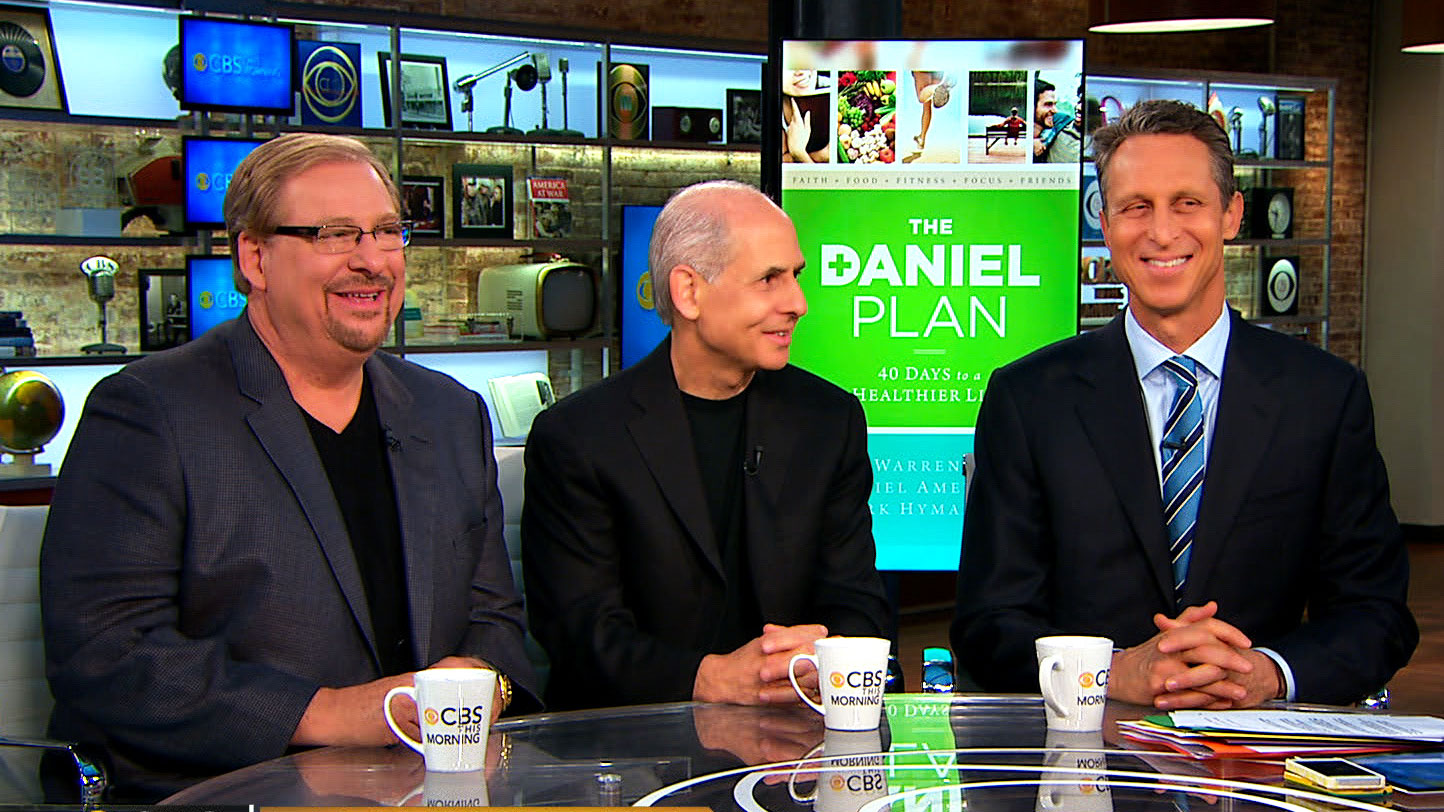 The Centers for Disease Control says nearly half of all Americans suffer from chronic obesity, which is part of what inspired Pastor Rick Warren of Saddleback Church to join forces with Dr. Daniel Amen and Dr. Mark Hyman to create "The Daniel Plan: 40 Days to a Healthier Life." It's a lifestyle program developed in 2011. In the first year, more than 15,000 church members lost more than 250,000 pounds.

Warren told the “CBS This Morning” co-hosts that he was actually baptizing approximately 800 church members and had a thought at around the 500th person that “wasn’t very spiritual.”  He thought to himself that “we are all fat,” and that he himself was overweight too. He said that’s where the idea for “The Daniel Plan” came from and he asked his church members if they wanted to lose weight with him.

“'The Daniel Plan' adds three additional things to the traditional health and fitness program. Most programs deal with food and exercise, but we say human beings are a lot more complex than that,” said Warren. “There are emotional reasons why you eat. There are spiritual reasons why you eat. There are mental reasons. So we added faith and focus and friends – or accountability, and changing the way you think and a spiritual motivation.”

Warren also said that they believe these added elements are the things that will keep people going, because most diets are based on will-power, which he thinks “eventually doesn’t work.”

Hyman explained to the co-hosts that it was really the “power of the community” that helped people succeed on this diet plan.

“That’s what we found - people that actually did the program together lost twice as much weight as people who did it alone,” he said. “It was the power of the community. The community was the medicine ... It’s powerful to show how they can help each other. They shop together. They cook together - ate together. They exercised together and that accountability - the love factor was what helped people change. ”

However, it’s not just about support. Amen told the co-hosts that weight loss is often connected to the human brain.

“It’s your brain that pushes you away from the table telling you that you’ve had enough or it is your brain that gives you permission to have the third doughnut,” he said. “There’s 140 studies now that say as your weight goes up, the actual physical size and function of your brain goes down, which should scare the fat off anyone.”

Amen said that the health of your brain determines “who you are,” so you need to be careful, but the “good thing” is that this can be reversed even if “you’ve damaged your brain through bad behavior.”

When asked about how to avoid yo-yo dieting, Warren explained that a lot of his problems had to do with the fact the past year had been “the most difficult year” of his life.

“I lost a son after 27 years of mental illness and I kind of had a triple whammy. First, I was in the hospital for a back problem, so I couldn’t exercise for about four months, then I didn’t sleep for six months after Mathew died and then I had members that were bringing me food every day in larger quantities than I could possibly eat,” he said. “When 'The Daniel Plan' started, I immediately lost 65 of the 90 (pounds) I wanted to lose. During the six months after Mathew, I gained about 35 of the 65 because I wasn’t exercising and was eating too much. I’ve lost 30 of that already and I’m back on the program.”

Warren explained that indeed, part of being able to lose weight was motivation, yet “looking good” and “living longer” was not enough to inspire him.

Part of what is prescribed in the plan, as Hyman explained to the co-hosts, is to detox and it’s important to know how to do that.

“The truth is most of us are eating industrial processed food that has hijacked our brain chemistry, our taste buds and our metabolism - we need to stop that,” he said. “So, getting off of the junk food, the sugar, the processed food, quitting and dairy, just for ten days, gives you a jump start to reset your metabolism and then people feel better.”

Hyman explained that there is a basic philosophy to what you can and can’t eat on this plan.

For Pastor Rick Warren, Dr. Daniel Amen and Dr. Mark Hyman's full interview, watch the video in the player above.

Teen who vaped with THC: "My lungs are like a 70-year-old's"