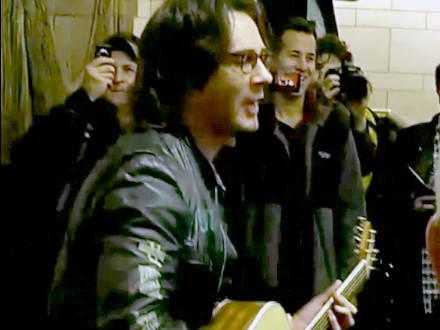 (CBS News) Some people riding the subway in New York City on Wednesday got a surprising treat during their commute when singer Rick Springfield decided to hold a pop up concert and sing-along to his hit song "Jessie's Girl". Watch the caught-on-tape moment unfold in the video above.

The impromptu performance was posted by YouTube user Randy Thomas on Wednesday, and while the video and audio is a bit raw and gritty, the fun being had by the crowd shines through. Spingfield had posted to fans on his Facebook page Wednesday night:

"Rick's making you late to work in NYC starting at the 34th Street subway station! Then uptown on the 1 trainwith more stops! Follow Rick on Twitter for real time updates! #ricknyc."

The 63-year-old singer has recently been making a series of media appearances in New York City to promote his new album "Songs For The End of the World". If you'd like to check out more from Rick Springfield, you can visit his website by clicking here and his Facebook page by clicking here.