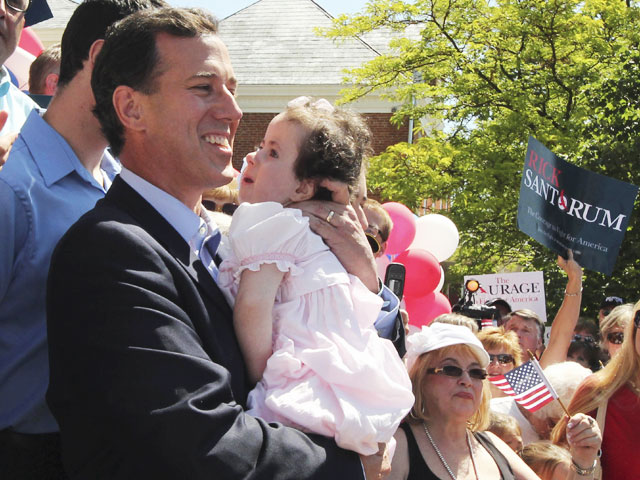 SARASOTA, Fla. - Rick Santorum will return to the campaign trail "as soon as he can," his oldest daughter Elizabeth told reporters Sunday. But over the weekend he remained with his youngest daughter Isabella, 3, who was admitted to the Children's Hospital of Philadelphia on Saturday night with pneumonia in both lungs.

Santorum took what was planned as a brief break from campaigning in Florida to return home to Pennsylvania to attend fundraisers and prepare his tax returns. He announced late Saturday night that he would extend his stay due to his daughter's health.

Sources told National Journal/CBS News that Bella, who was born with a severely disabling genetic disorder, was "improving" and was not on a ventilator.

Speaking on behalf of her father at a campaign rally at the Dolphin Aviation base here, Elizabeth Santorum said the candidate "wishes he could be here," but that he is "exercising his most important role, which is being a dad. So that's why he's home."

A local GOP leader led the crowd of about 250 in a moment of silence for Bella. Elizabeth - joining the Duggar Family from TLC's "19 Kids and Counting" - said at the end of the event that the Santorums expected rough patches in the campaign process.

"I think back on the many nights around our kitchen table," she said. "We knew from the very beginning that this would not be easy; this was not the easiest course for our family . . . but we knew that this would be worth it, because America is worth it."

Talking briefly with reporters after the rally, Elizabeth said of her father's decision to stay home, "You know, we do what we do as a family; we stick together. And we get through, and we're hanging in there."