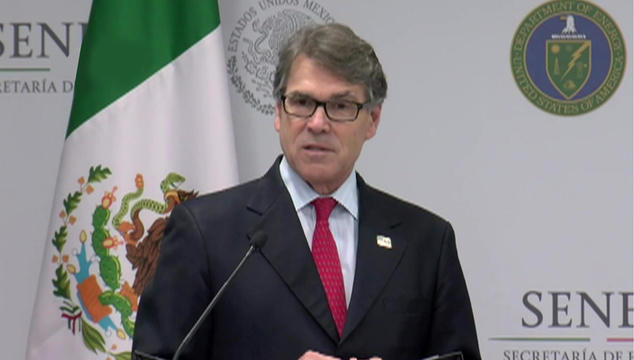 "No one has ever seen flooding like this," he told CBSN in an interview Friday, noting that parts of Texas had seen 50 inches of rain.

In spite of the record-breaking rainfall and scientists charging that warming seas have caused hurricanes of greater intensity, Perry declined to weigh in right now on whether the White House would make any changes to its stance on climate change.

"We can line up scientists on both sides of this," he told CBSN's Stephanie Sy, but "this is not the time to be having this conversation." At this moment, he said, it's time to focus on helping victims recover from the damage wrought by Harvey.

"Everyone wants to run to the climate change debate, but that is very secondary at this particular time," he said.

He also dismissed the notion that President Trump's budget would cut hundreds of millions of dollars from the Federal Emergency Management Agency (FEMA) and disaster relief funding, saying that in his experience as governor and as energy secretary he had never seen a final budget that resembled the original one proposed.

An analysis by scientists at the University of California, Davis on repetitive flooding pointed out that Texas has a large share of properties that are subject to repeated flooding. FEMA, it pointed out, keeps a list of properties designated as Severe Repetitive Loss Properties (SRLPs). They're defined as properties that have filed for at least four claims of $5,000 or more from flood damage -- or total claims that exceed the value of the structure.

Of the 30,000 on the list, 4,889 are in Texas and have received some $962 million in National Flood Insurance Plan (NFIP) payments, second only to Louisiana. The analysis points out that Harvey is likely to push Texas into the No. 1 spot.

Over half of these properties are in Harris County, the analysis says, and 1,925 are in the city of Houston. This raises questions about the flood maps and whether some of the properties damaged by Harvey should even be rebuilt, a point that Perry seemed to concede.

"I think it's a conversation worth having," Perry told Sy. But, "people first, paperwork second," he added. He went on, however, to consider the point.

"Are our flood maps modern? Do we need to look at when these flood maps were done? Has there been a change in weather patterns?" Perry asked. "And we need to have that conversation. I am completely open to having those discussions at the appropriate time."

In an attempt to keep gas prices from rising too quickly in Harvey's wake -- gas prices have already hit a two-year peak -- Perry on Friday authorized the release of 500,000 barrels of crude oil from the Strategic Petroleum Reserve.