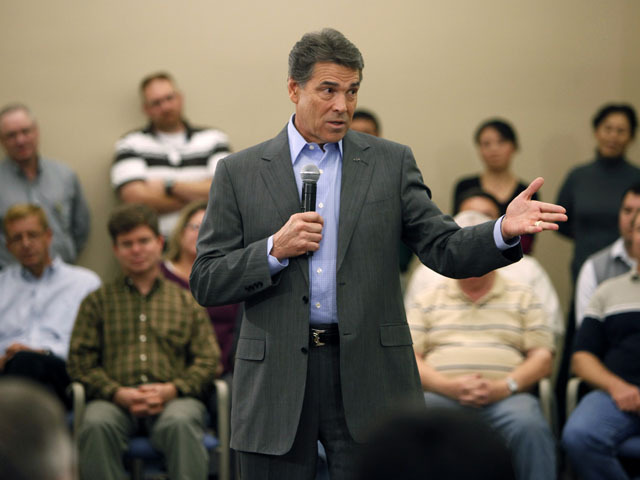 Texas Gov. Rick Perry sought to draw clear lines between his foreign policy plans and the actions taken by President Obama Tuesday,  pledging not to take any military options off the table when dealing with Iran.

Perry also suggested the U.S. government should have been actively involved in trying to remove Iranian President Mahmoud Ahmadinejad from power.

Perry was among the Republican candidates being interviewed Tuesday as part of a joint venture between ABC News and Yahoo. He talked to "This Week" host Christiane Amanpour from his home in Austin, Texas.

"I never would take a military option off the table when it comes to dealing with Iran," Perry said when asked about the recent developments that suggest Iran is closer to having a nuclear weapon. He criticized Mr. Obama for pursuing talks with Iran and Syria during the early part of his term.

"I think the United States needed to be actively involved in taking that oppressive regime out of Iran," Perry added, suggesting both diplomatic and covert tactics would be appropriate. "We had an opportunity...we missed it," he said of the upheaval in Iran in 2009.

He has been stepping up his criticism of the Obama's record abroad recently. In a radio interview with conservative talk show host Bill O'Reilly Monday, Perry credited well-trained Navy SEALS that Obama "inherited" from previous administrations for Osama bin Laden's death, even though Perry had previously lauded the president for the mission.

Perry also said the "Don't Ask, Don't Tell" policy affecting gay military service members, which was repealed last year, "worked very well," though he hedged on saying whether or not he would reinstate it as president.

"A president of the United States changing a policy that was working well and to do it while we were at war in two different theaters, I think it was irresponsible and I truly think that he did it to respond to his political base," Perry said.

When Amanpour asked if he would have been comfortable serving alongside a gay soldier when he was in the service, Perry said, "If an individual in their private life makes a decision about their sexuality ... that's their business." That is why, he said, the policy was effective. He disagreed with the assessment that it closed off military service to some gay civilians.

Perry did speak highly of one high-ranking member of the Obama administration.

"I could sit down and talk to (Vice President) Joe Biden," he said. "I think Joe Biden gets it. I think he's probably a loyal vice president, but I think he understands that you cannot take this country forward by raising taxes." Perry also suggested that Biden might secretly oppose the health care law and the Dodd-Frank financial reform bill.

On the topic of the sex scandal engulfing rival Herman Cain's campaign, Perry declined to comment, saying, "I don't have an interest in getting off my message."

The interview also touched on Perry's education record in Texas. He said that the state had increased its education spending by "substantial amounts," even though that budget was recently cut by $4 billion. The governor pointed to increases in math statistics among African-American and Hispanic children and said more young people were being given the opportunity to go to college. He did not mention the 2001 law he supported giving in-state tuition to the children of illegal immigrants, which has been controversial with conservatives in the GOP.

"Texas is making as good of progress as any state," he said.

As with all the candidates, the interview ended with a lighting round of questions.

His worst job ever? Building fences with a jackhammer in the mid-1970s.

TV guilty pleasure? He said he's "not much of a TV person."

Happiest moment ever, aside from his marriage and birth of his children? "The happiest I will be is when ... my daughter finds her perfect mate."

Watch the interview below: