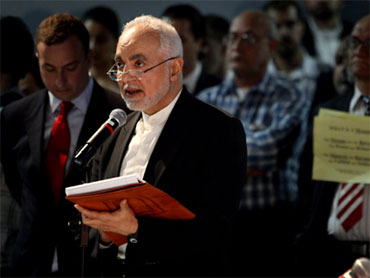 New York Republican gubernatorial candidate Rick Lazio is appearing in a new ad in which the he labels the imam behind the so-called "Ground Zero mosque" a terrorist sympathizer and asks, "who is really behind it?"

According to the National Review, the spot was put out today by the New York State Conservative party.

"New Yorkers have been through enough," Lazio says in the spot. "Now a terrorist-sympathizing imam wants to build a $100 million mosque near ground zero. Where is this money coming from? Who's really behind it?"

The only evidence Lazio offers that the imam, Feisal Abdul Rauf, is "terrorist-sympathizing" is the imam's comment that U.S. foreign policy was an "accessory" to the Sept. 11 attacks in a 2001 "60 Minutes" interview.

"I wouldn't say that the United States deserved what happened, but the United States policies were an accessory to the crime that happened," Rauf told CBS' Ed Bradley in that interview. Pressed to explain the "accessory" comment, he replied: "Because we've been accessory to a lot of innocent lives dying in the world. In fact, in the most direct sense, Osama bin Laden is made in the U.S.A."

The imam said in the same interview that "Fanaticism and terrorism have no place in Islam." He is currently on a U.S State Department sponsored trip to the Mideast to foster religious understanding, and made similar trips under the Bush administration.

Lazio's suggestion in the ad that there is already money behind the project is misleading. The Cordoba Initiative, which is backing it, has reportedly yet to begin fundraising for the building, which is actually an Islamic cultural center two blocks from the former site of the World Trade Center.

Lazio, one of the first politicians to come out against the project, criticizes likely Democratic nominee Andrew Cuomo in the ad for defending efforts to build the mosque. He trails Cuomo 60 percent-28 percent among registered New York voters, according to a Sienna poll.

Lazio's ad is not the first to spotlight the issue. Earlier this week businessman Rick Scott, a Republican running for Florida governor, released an ad in which he said President Obama is "wrong" for suggesting that the project is about tolerance.